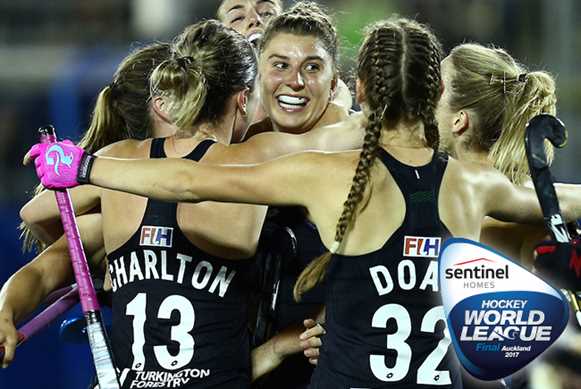 They won their semi-final in front of a packed stadium and will now take on the winner of the other semi-final, taking place at 20:15 on Saturday, between Netherlands and Korea.

New Zealand’s win followed Argentina’s 4-0 victory against Germany earlier in the day in the 5/6 classification match.

Settling into the second quarter, England created one of the first notable opportunities. Sophie Bray sent the ball into the goal and thought she had scored. However, upon referral it was deemed that Lily Owsley’s pass was from the back of the stick.

New Zealand continued to probe but their opponent’s structure held firm. England too looked dangerous and right on the stroke of half-time New Zealand goalkeeper Sally Rutherford was called on to block Hannah Martin’s direct shot.

As the game went on, New Zealand began to exert their influence on the game. In the fourth quarter they created a number of chances. England goalkeeper Maddie Hinch, as she often does, was impenetrable, making a super right sided save as she smothered a shot from point blank range from Shiloh Gloyn.

“Tonight we saw two good teams having a good fight and tussle. In the end the game could have gone either way. The difference was Olivia’s goal."
Mark HAger, New Zealand Coach

With just over five minutes to go, Hinch was in the action again, saving brilliantly from barrage of shots, but conceding a penalty corner to New Zealand.

The resulting set-piece was perfectly injected and trapped, allowing drag flicker Olivia Merry to strike the ball to her left past Maddie Hinch’s outstretched right hand and into the England net to give New Zealand the lead.

Following their win, New Zealand Coach Mark Hager said: “Tonight we saw two good teams having a good fight and tussle. In the end the game could have gone either way. The difference was Olivia’s goal. We have lost the apprehension we had in the early stages of this event. We are in the top echelon of hockey now.”

New Zealand’s goal-scorer Olivia Merry added: “We got on the front foot from the beginning. The goal was coming for a long time but Maddie Hinch kept England in the game. We wanted to build on the game against Argentina but ended up grinding out the result in the end.”

Speaking after their loss, England’s Lily Owsley summed up their performance. She said: “It was fast, it was attacking. Usually we back ourselves against most teams when it comes to playing an open game but unfortunately they were so quick and so fit. We couldn’t match them in the second half -  we just couldn’t control it.”

Earlier in the evening, Argentina fired into action against Germany in the 5/6 classification match. Stung by losing the quarter-final to the hosts, they came out with all barrels blazing, chasing everything down, denying Germany any kind of possession.

In the eighth minute, from a defensive penalty corner Argentina counter attacked down their left flank. Eugenia Trinchinetti was in her attacking circle in a flash and the German players were caught upfield. A one-on-one with Nike Lorenz saw Trincheinetti score to give Argentina a 1-0 lead.

Four minutes later Agustina Habif added her magic to the match with a stunning penalty corner lay-off goal. She was the injector and received the ball back to double the Pan American champions lead.

2-0 became 3-0 shortly afterwards, in the 42nd minute. Delfina Merino received the ball from the right and deftly one-touched the ball up over German goalkeeper Noelle Rother high into the net.

With only 28 seconds left in the match, Argentina concluded their win with another goal. Germany had removed their goalkeeper and Delfina Merino took advantage, jinking her way down the left side, capping off an excellent match with her second goal.

This match marked Argentina’s Roccio Sanchez 200th match. Afterwards she said: “I think we were very effective tonight. We were very hungry following our previous loss.”

Speaking about their defeat, Germany’s Anne Schroeder, who earned her 100th cap today, said: “For us it was a lesson. Argentina did very well. They were aggressive and smart. We can learn a lot playing against the likes of Merino, Granatto and Cavallero. But of course it was a very disappointing finish to this League.”

Saturday’s matches see USA take on China in the 7/8 classification match at 18:00 while Netherlands take on Korea at 20:15 on the second semi-final.