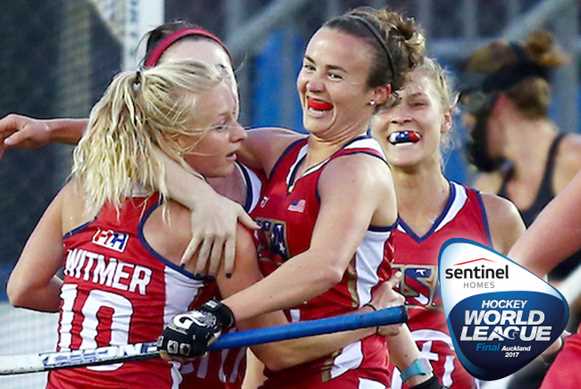 The finalised Pool A standings were confirmed today

Netherlands continued their dominant form with a win against Korea whilst USA secured their first win in what was the last Pool A matches of the Sentinel Homes Women’s Hockey World League Final 2017 being held at Harbour Hockey Stadium in Auckland, New Zealand.

Tonight's results mean that Pool A ends with Netherlands in first place, USA second, Korea third and New Zealand fourth as the event moves towards the Quarter-Finals.

World number one ranked Netherlands made it three wins from three as they made light work of Korea in the opening game.

The reigning European champions dominated possession and territory in the early stages, getting a shot on goal in the first 30 seconds of the match.

However the Korean defence was organised and resolute. Korean captain Kim Youngran and Cha Yesol were key defenders during the frequent Dutch attacks and made them work hard to piece together their usually fluent passing game.

In the second quarter, Netherlands upped the pressure on the Korean defence, with Jang Soo Ji pulling off some stunning saves in goal.

In the 26th minute Margot van Geffen superbly deflected Caia van Maasaaker’s drag flick high into the net from the penalty corner to take a 1-0 advantage into the half-time break.

The Dutch attack continued in the third quarter, although regular sorties into the Korean defence were mopped up. Korea then had a golden chance in the 38th minute but Park Seunga couldn’t trap the cross.

21 year-old goal scoring sensation Maartje Krekelaar doubled Netherlands lead in the 41st minute when she tapped in a ball she received from the right, through a sea of legs and missed-traps from others, and showed her razor sharp reactions to score and bring her tally to four goals at this event.

The final quarter was all Oranje, with Netherlands champion drag flick expert Caia van Maasaaker scoring with only five minutes left on the clock.

"We know that the Korean’s are always tough opponents, they keep their game tight, so it was an important win for us.”
Caia van Maakaasar

Despite further attacks, Korea defended well and the score ended 3-0, a result which secured top spot in the Pool for Netherlands.

Speaking about her side’s victory, Caia van Maakaasar said: “It was a difficult start in the first half. It took us a while to get into our rhythm, but in the second half we got our tempo up. We know that the Korean’s are always tough opponents, they keep their game tight, so it was an important win for us.”

Korean captain Kim Youngran said: “It was unfortunate that we couldn’t show all our ability tonight but we are satisfied with today’s game and satisfied for our Pool matches so far. I am confident we will achieve more at this World League Final.”

In the later game, USA picked up their first win of the event with a confident 3-1 win against hosts New Zealand.

This match began at a frantic pace, USA absorbing everything that was thrown at them from New Zealand’s Black Sticks, buoyed again by a large home crowd.

However, against the run of play USA scored first. A serious foul outside the circle by New Zealand’s Brooke Neal saw USA awarded a penalty corner which they scored from. A deft deflection from Ali Froede’s drag flick was neatly touched in by Jill Witmer, her first goal of the event.

The second quarter started as the match had - quick exchanges with end to end hockey. In the 22nd minute New Zealand got their sixth penalty corner and Ella Gunson got her stick to the Olivia Merry slap hit at goal, drawing the scores level at 1-1.

Just before the end of the third quarter, USA struct again. Taylor West drove hard from the right, went across the face of the circle and despite her reverse hit lacking power it had enough angle to get past O’Hanlon in goal. The 3-1 scoreline remained as USA went on to pick up an important win which earned them a second place finish in the Pool.

Following their win, USA’s Taylor West said: “New Zealand are a great team and we knew it would be a fight from start to finish but we were strong on the ball. We wanted to play forward and capitalise on our chances and we did.”

New Zealand Coach Mark Hager said: “We had 56 circle penetrations to USA’s 12 so it’s disappointing that we’re not putting the ball in the net. We have improved from day one but defensive errors hurt us. We were not good enough tonight.”

Tomorrow sees the last of the Pool B matches, with Germany taking on Argentina at 18:00 to see who finishes top whilst England play China at 20:00.