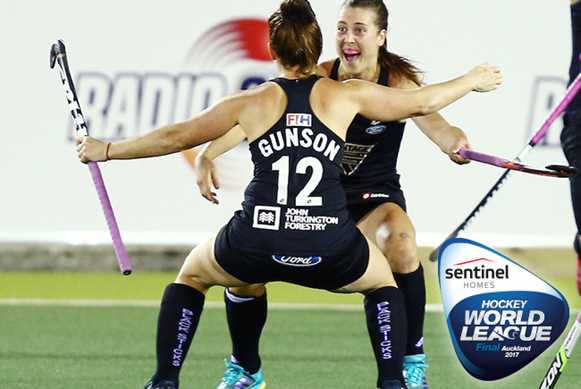 In the first quarter-final of the event, Korea and Germany went head to head. The first quarter saw many of Germany’s right sided attacks start to pay dividends, with Marie Maevers making some excellent runs into the circle.

She was eventually rewarded, forcing three penalty corners early on, the last of which Nike Lorenz converted with a powerful, accurate drag flick to goalkeeper Jang Soo Ji’s right hand side.

Korea continued to absorb the German attacks just outside their defensive circle and, with renewed confidence, they started to get and exploit space with plenty of possession.

With four minutes left in the half, Korea’s attacks were starting to threaten and unsettle the German defence with Hong Ji Seon’s deflection going close.

Two minutes later, in the 28th minute, Korea broke through as they capitalised on a green card for German defender Selin Oruz.

Korea  drove down the right and Lee Yuri’s accurate cross reached team mate Cho Hyejin who tapped the ball into the goal to draw the teams level.

Korea then took the lead six minutes after the break. This time their penalty corner proved fruitful, Jang Heesun’s shot found its way between Cuipa’s pads.

The lead was brief however. Penalty corner specialists Germany treated everyone to a piece of hockey perfection. Marie Maever’s excellent low body position allowed her to smash in the lay-off from team-mate Lorenz and make it 2-2.

In the 41st minute-Germany’s penalty corner artillery thundered into action again. A sneaky double deception after the trap at the top of the circle followed by a subtle but perfectly accurate pass to Marie Maevers allowed her to score again as Germany retook the lead.

Korea then took the opportunity to treat the crowd to their own penalty corner tricks. Some neat deceptive play preceeded a pass to Park Mi Hyn who slammed the ball across the goal behind the German defence for Park Seunga to once again tie up the match.

The score remained 3-3 therefore the game went to shootout. And it was Korea who emerged victorious. Their ‘keeper, Jang Soo Ji, was superb, saving three of the four from the German players.

At the same time, Korea’s outfield players proved more clinical, with Park Mi Hyun, Park Seunga and Cho Eunji scoring their attempts. Nike Lorenz scored the only successful goal for Germany in the shootout, which ended 3-1 to the Asian team.

Speaking about their victory, Korea’s Jang Heesun said: “We are really happy at the moment. We just can’t believe it – it’s unbelievable - some of the team are crying they are so happy. We will take that confidence into the next game and hopefully that will lead to a good result in the semi-final.”

On the other hand, Germany’s Marie Maevers said: “We were good. We worked hard. We are disappointed because we had lots of chances but Korea were really good today. It is a bit unlucky for us, their goalkeeper Jang was very good - she deserved to win the penalty shootout.”

In the evening game, hosts New Zealand delighted the home crowd as they came from behind to beat reigning champions Argentina.

It was however the Pan American champions who started the match well as Delfina Merino opened the scoring in the second minute.

Argentina continued to dominate the first half, playing with confidence and energy, but New Zealand showed their resilience, breaking down attack time and time again, with their defence and goalkeeper Sally Rutherford in fine form.

Argentina’s Maria Granatto, Delfina Merino and Rocio Sanchez remained threatening throughout but it was the hosts who scored next.

"I thought goalkeeper Sally Rutherford was sensational for us. It was all about getting over a hurdle and we did that tonight.”
Mark Hager, New Zealand Coach

In the 32nd minute New Zealand forced their second penalty corner. Some deception at the top of the circle helped Brooke Neal stroke the ball over Argentinian goalkeeper Belen Succi to draw the teams level.

That knocked the confidence and energy out of Argentina. A minute later another New Zealand penalty corner offered a different combination.

Ella Gunson’s drag flick went low to the goalkeeper’s right and Stacey Michelson, the injector, hung her stick goalwards and allowed the ball to ricochet neatly into the goal to the delight of thousands of Black Sticks fans.

Argentina poured on the pressure in the final quarter, forcing a number of last grasp saves from the New Zealand defence, but they couldn’t do enough to find the equaliser as New Zealand went on to win 2-1.

Speaking afterwards, New Zealand Coach Mark Hager said: “We haven’t ever lost a quarter-final but it was heart failure watching the last ten minutes. We were always in the game - the girls stood up and did what we asked them to do - except the last ten minutes. I thought goalkeeper Sally Rutherford was sensational for us. It was all about getting over a hurdle and we did that tonight.”

Argentina’s Augustina Albertarrio said: “Well that’s the game. Sometimes you play good, sometimes you play bad - that is the world of sport. We are really disappointed. We came top in the Pool games but there are two separate tournaments here. Everyone wants to make it to the final.”

Two more quarter-finals will take place tomorrow, with USA taking on England at 18:00 and Netherlands playing China at 20:15.

The winner of USA v England will then play New Zealand in one Semi-Final while the winner of the Netherlands v China match will play Korea in the other Semi-Final. The other teams will play in classification matches.