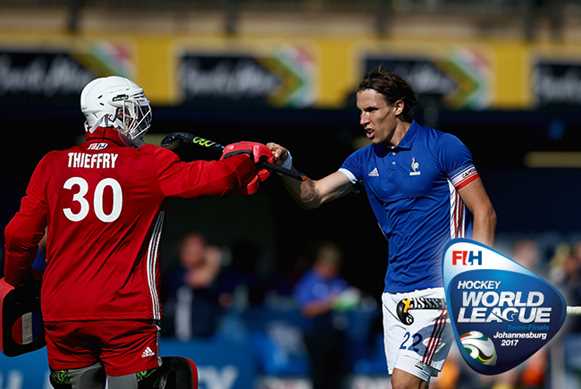 Johannesburg, South Africa: Reigning men’s World Cup and Hockey World League title holders Australia were given a real scare by qualifiers France on Day 4 of the Hockey World League Semi-Finals, currently being played at the University of the Witwatersrand.

The day’s play began and ended in Pool B, with Germany (FIH Hero World Ranking: 3) taking a 5-0 win over Egypt (WR: 19) before Belgium (WR: 9) defeated Ireland (WR: 5) 6-2 to claim their second win of the competition and move clear at the top of the standings.

Germany were slow starters against an Egypt side that showed significant improvement from their 10-0 loss to Belgium on the opening day of the men’s competition. Egypt kept the Rio 2016 Olympic bronze medallists off the score-sheet until the 23rd minute, when Marco Miltkau netted before a Tom Grambusch penalty corner took the score to 2-0 ahead of half time. Dieter Linnekogel, Jonas Gomoll and Timm Herzbruch all contributed as Die Honamas emerged comfortable 5-0 winners.

“The first half was not very good for us, especially in our structure but in the second half we took our chances so 5-0 is a good result for us”, said Germany goal-scorer Timm Herzbruch before answering a question about his blistering strike that flew into the top left corner. “It was a really good hit, on the volley. I hope in the next game I can also score.”

Belgium’s Red Lions were in imperious form against the Green Machine of Ireland in the day’s final match, with Tom Boon producing a penalty corner masterclass. Ireland took the lead in a closely contested first quarter through Stephen Cole, but second quarter strikes from Simon Gougnard, Cedric Charlier and the first of three penalty corner drag-flicks gave Belgium a 3-1 lead at half time. A penalty stroke from Loick Luypaert and another two high quality Boon penalty corners took the score to 6-1 before a fine backhand strike from Ireland’s Alan Southern completed the scoring.

“It has been a while since I scored a hat-trick but the corners were working well today”, said Tom Boon after the match. “Ireland are a very good team but when we play like that we have enough in the locker to beat most teams.”

France were outstanding against the illustrious Australians, storming into a 2-0 lead before succumbing to a 3-2 loss. Both of France’s goals came in the first quarter, with Victor Charlet’s blistering penalty corner being doubled by a superb break-away goal finished off by Pieter van Straaten’s fierce slap-shot from the top of the circle. The Kookaburras were rocked, but retained their composure to reduce the arrears through Jake Whetton, who scored from close range in the second quarter.

France’s defence seemed almost uncrackable at times, but eventually Australia levelled when Josh Pollard smashed home a backhand strike from a tight angle with nine minutes to go. Kookaburras captain Mark Knowles scored the winner from the penalty spot two minutes later, although his team had to survive a last gasp penalty corner in order to claim all three points in their opening match of the competition.

“It was a very tough game, there are no easy games”, said Australia Head Coach Colin Batch. “We thought we prepared well for the game against France. We were a bit slow to start, they took advantage of us having too many players forward and they were very good on the defensive.”

New Zealand - who play Australia on Saturday in the Oceania derby match - proved too strong for Japan, winning 3-1 to move top of Pool B at the end of the second day of the men’s competition. The Black Sticks scored twice in the second quarter against the Samurais, with Jared Panchia and Nic Woods on target. Despite some excellent counter-attacking work from Japan, New Zealand were well worth their lead and added a third thanks to a powerful Stephen Jenness in the third quarter before Japan's Hirotaka Zendana scored a consolation goal.

"It was a good performance and was nice to get on the board with a penalty corner rebound”, said Jared Panchia post-match. “It is a bit disappointing to concede the late goal, but we played well. We play Australia next and those matches are always a bit special, so we’ll try and make the most of the rest days ahead of that match.”

Wednesday will feature the third day of action in the women’s competition, with eight teams continuing their drive to secure a place in the tournament quarter-finals. India and Chile currently occupy the bottom two positions in Pool B and take to the field at 1200 (South Africa Standard Time / UTC 2), each knowing that a win would boost their chances of reaching the last eight.  At 1400, Pool A opponents Ireland and Poland will contest for their first wins of the competition before Japan and England go head-to-head at 1600. Home favourites South Africa play Argentina at 1800, with the host nation looking to build on their opening day draw with India by claiming victory against one of the world’s best hockey teams.