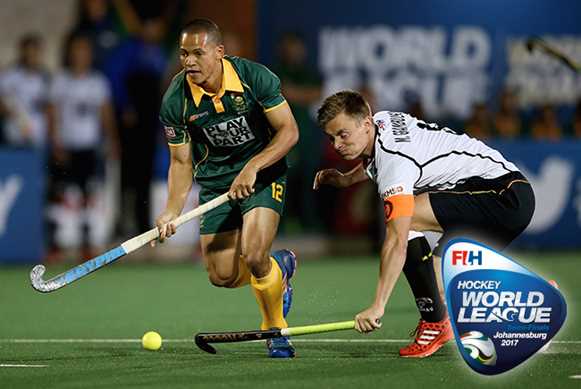 Johannesburg, South Africa: Following a pulsating day of action at the University of the Witwatersrand, six of the eight teams that will compete in the men’s quarter-finals at the Hockey World League Semi-Final in Johannesburg have been revealed.

In Pool B, Ireland and Germany were winners of the first and last matches of the day, with Ireland fighting back from a goal down to beat Egypt and Germany just edging past home favourites South Africa in a breathtaking evening match under the floodlights. The results mean that Belgium, Ireland and Germany are all assured of a place in the competition quarter-finals, with Egypt and South Africa both still in contention for the one remaining place.

Ireland’s Green Machine found themselves going into half time trailing 1-0 against opponents Egypt in the first match of the day, with Ahmed Elnaggar’s wonderfully taken open play effort proving to be the difference at the break. However, Ireland hit back straight after half time through Chris Cargo before Shane O’Donoghue - who had an earlier strike correctly ruled out by the video umpire due to the ball hitting the back of his stick - scored a sublime penalty corner drag-flick into the roof of the net with two minutes remaining to give Ireland all three points.

While the win booked a quarter-final ticket for the Irish, the all-important finishing position in the pool ahead of the knock-out phase has not been settled. As for the much-improved Egyptians, they remain at the bottom of the table with their survival in the competition hanging in the balance.

“We didn’t have a very good fourth quarter but we played well today and are getting better each game”, said Egypt captain Ahmed Ezz after the game. “We are targeting fourth place in the pool to get to the quarter-finals, and I think if we play like this then we can beat South Africa in our next match.”

Egypt will go into their meeting with South Africa knowing that only a win will be good enough to keep alive any chances of a place in the last eight. The home favourites were in action against Olympic bronze medallists Germany in the final match of the day, with another big crowd watching the team produce a valiant performance but one that ultimately ended in a narrow defeat.

South Africa were excellent in the first period, having the better chances by far but being unable to get the breakthrough before eventually conceding just ahead of half-time when Moritz Trompertz chipped in from a tight angle. Strikes from Niklas Wellen and Germany captain Mats Grambusch moved the score to 3-0 early in the third period before Austin Smith - playing his 150th game for South Africa - pulled one back with a fine penalty corner effort. Timm Herzbruch re-established the three goal cushion ahead of the an action-packed final quarter in which Smith scored a second before setting up a third for the diving Jonty Robinson. It set up a dramatic, utterly absorbing final few minutes, but Germany clung on to take a 4-3 victory.

South Africa defender Rhett Halkett said: “We are disappointed to lose but it was much better performance from the team throughout the 60 minutes. Physically we showed we could stick with them right to the end so yes, disappointed not to get a point but it was a great game and a phenomenal atmosphere out there.”

The South Africa versus Germany match was a significant one for umpire Haider Rasool from Pakistan, who received his Golden Whistle on the occasion of umpiring his 100th senior international match.

In Pool A, France cruised to a 4-1 win over Japan to confirm their place in the competition quarter-finals, with Australia doing the same by defeating Spain 2-0 to move top of the table. Australia, France and New Zealand are all now guaranteed places in the quarter-finals, while Spain look favourites to be the fourth qualifier ahead of a Japanese side that have just one pool match - against Australia’s Kookaburras - remaining.

France were excellent against the Samurais, continuing with the fast-paced counter-attacking style that served them so well in their draw with New Zealand and narrow defeat at the hands of reigning world champions Australia. Open play goals from Etienne Tynevez and Gaspard Baumgarten opened up a 2-0 lead for France, before Japan’s Hirotaka Wakuri reduced the deficit ahead of half time. France killed the game thanks to goals in the third and fourth quarter, with Francois Goyet’s superb penalty corner deflection proving unstoppable ahead of a poacher’s goal from Blaise Rogeau that completed the 4-1 score-line, ensuring that the 100th senior international appearance of Jean-Baptiste Forgues ended in triumph.

“We have reached the quarter-finals, the job is done but we have to keep pushing more and more in this competition”, said France captain Victor Lockwood, before looking ahead to his team’s final pool match against Spain, a team coached by former France international Frederic Soyez, on Saturday. “They are a very good team with a great style and very skilful players. We know the coach, he’s a friend, so we are looking forward to it.”

Spain were in action against reigning world champions Australia in the third match of the day, and there was very little to choose between the two sides throughout. Despite both teams being renowned for their flair, speed and counter-attacking, it was the defences that really excelled in this contest. The deadlock was finally broken seven minutes from the end thanks to Dylan Wotherspoon’s brilliant close-range deflection, with Trent Mitton putting the result beyond doubt in the final minute with a second for the Kookaburras.

“It was really good progress for us from game one to game two”, said Australia Head Coach Colin Batch. “We knew we were below our level in our first match so to step up in game two against a really good Spanish team was great progress in showing what we’re capable of. I think the next game is about momentum and we have to believe we can keep improving, so the match against New Zealand (on Saturday) will be another step up. We need to become consistently good performers, and that’s what we have to do against New Zealand.”

On Friday 14th July, the day will feature four crucially important matches in the women’s competition. Poland need to defeat Japan in their Pool A meeting at 1200 South African Standard Time (UTC +2) if they are to have any chance of reaching the quarter-finals, with Pool B rivals Chile and South Africa both desperate for the points in their showdown at 1400. Pan American giants USA and Argentina take to the field at 1600, with the winner taking a big step towards topping Pool B before England aim to recover from their Pool A defeat against Japan when they play unbeaten Germany at 1800.