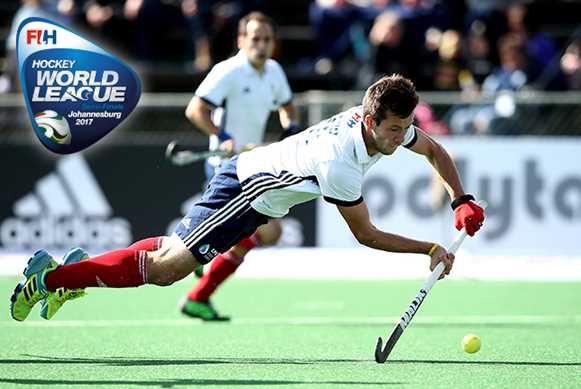 Johannesburg, South Africa: Olympic silver medallists Belgium made a statement of intent with a big victory on the opening day of the men’s competition at the Hockey World League Semi-Final, where Spain and Ireland were also winners at the University of the Witwatersrand.

The first match of the day saw New Zealand (FIH Hockey World Ranking: 8) being held by Hockey World League Round 2 qualifiers France (WR: 17) in a fast paced Pool A encounter full of field goals. Stephen Jenness gave the Black Sticks the lead inside three minutes, but a fine diving finish from Etienne Tynevez restored parity two minutes later. A goal from François Goyet put France ahead before a Hugo Inglis double either side of half time put New Zealand back in the driving seat at 3-2. However, Pieter van Straaten’s goal just before the third quarter break completed the match scoring at 3-3.

“They [France] came out firing and were very dangerous out there today”, said New Zealand’s Kane Russell, who reached the milestone of 100 international appearances, after the match. “It was pretty average from our point of view, though. It is a very proud moment for me to reach 100 games, but I hope that we can bounce back and get the results that we need in this tournament.”

Spain (WR: 10) took full advantage of the draw in the day’s opening match, earning a 2-1 victory over Japan (WR: 16) to become early frontrunners on Pool A. Japan’s Samurais were arguably the better team in the first two periods, being denied by some excellent saves from Red Sticks goalkeeper Quico Cortes as well as hitting the frame of the Spanish goal. Spain found themselves trailing 1-0 shortly after half time thanks to a glorious penalty corner drag-flick from Shota Yamada. Josep Romeu levelled the scores in the 39th minute before Alvaro Iglesias slapped home what proved to be the winning goal 11 minutes from full time. It was a memorable day for two players, with Spain attacker Pau Quemada playing his 200th international match and Japan striker Kenta Tanaka making his 100th appearance for his country.

Belgium (WR: 5) were in sensational form in their opening match of the competition, with nine different scorers contributing to a 10-0 victory over Egypt (WR: 19). Red Lions goalkeeper Vincent Vanasch was forced into making a fine glove save inside the opening 60 seconds, but after that it was all one-way traffic. Goals from team captain Thomas Briels, Tom Boon, Amaury Keusters and Emmanuel Stockbroekx killed the game inside the opening quarter, with Nicolas De Kerpel and Loick Luypaert making it 6-0 at half time. Cedric Charlier and Sebastien Dockier made it eight goals from eight scorers before Boon and Briels made it a perfect ten with their second goals of the match.

A large and passionate crowd created a superb atmosphere in the final match of the day, although they left the stadium disappointed as Ireland (WR: 9) - a team coached by former South African international Craig Fulton - claimed a 2-0 triumph over host nation South Africa (WR: 15). Matthew Nelson scored from close range after ten minutes to give the Green Machine a lead that, despite a massive effort from the home favourites, they would never relinquish. South Africa came close on numerous occasions but found FIH Hockey Stars Goalkeeper of the Year David Harte in inspired form before Shane O’Donoghue sealed the victory with a 47th minute penalty corner drag-flick.

“One-nil is always a very dangerous score-line so it was important to get that second goal”, said Ireland’s Shane O’Donoghue. “The atmosphere was great today and we are really pleased with the win. Now we’ll focus on our next match against Belgium.”

Attention switches back to the women’s competition on Monday (10th July). At 1200 South African Standard Time (UTC +2), Argentina get their Pool B campaign up and running when they face South American rivals Chile before Germany and Ireland meet in Pool B at 1400. England face Pool A opponents Poland at 1600 before USA and India take to the field for their Pool B encounter at 1800.