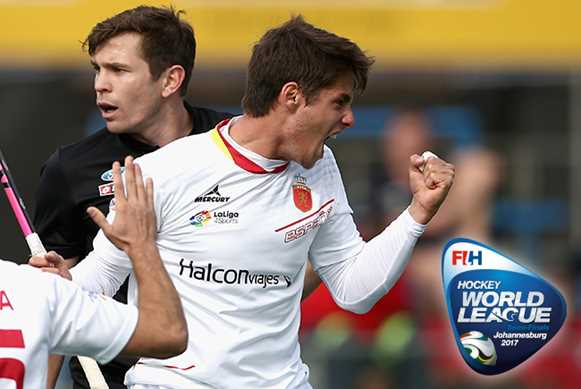 Johannesburg, South Africa: Australia and Germany were confirmed as the winners of their respective pools at the Hockey World League Semi-Final in Johannesburg, revealing the line-up for the competition quarter-finals.

In Pool A, Australia’s Kookaburras defeated bottom of the table Japan 7-2 to confirm their place at the top of the standings, with Spain, New Zealand and France finishing in second, third and fourth respectively. The battle between Spain and New Zealand went the way of the Red Sticks, who claimed a remarkable 4-3 victory over the Black Sticks to take second place in the pool. New Zealand finished ahead of France purely on goals scored, with the two sides completing the pool phase level on points and goal-difference.

Australia (FIH Hero World Ranking: 2) opened the scoring just 12 seconds into their match against Japan (WR: 16), with Mark Knowles making no mistake from the penalty spot after Trent Mitton was brought down on-route to goal. The world champions turned the screw with a further three goals ahead of half time as Jake Whetton netted a double before Dylan Wotherspoon made it 4-0 at the break. Aran Zalewski and Tom Wickham made it 6-0, with Japan scoring goals either side of the third quarter break through penalty corners from Shota Yamada and Hirotaka Zendana. Australia added gloss on proceedings when Jeremy Hayward bagged a penalty corner to complete the scoring.

“We said that if we won all of our pool games we would have been happy, but we knew that the quarter-final was our main aim”, said Australia captain Mark Knowles. “The coach [Colin Batch] is a bit disappointed with the performance today. I think the only good thing we did was to start really well, which is what you have to do against these sides.”

The final match of Pool A was one of the most entertaining of the event so far, with Spain (WR: 10) eventually taking all three points against New Zealand (WR: 8) in a contest that seemed to constantly shift in momentum. Spain established a 2-0 lead through Josep Romeu and Enrique Gonzalez, but a brilliant, brave tactical move from Black Sticks Head Coach Darren Smith saw his goalkeeper replaced with a kicking back midway through the third quarter, a decision turned the match on its head. New Zealand played for 15 minutes without a goalkeeper and scored three times, with Shea McAleese, Nic Woods and Kane Russell taking the score to 3-2 before goalkeeper Devon Manchester returned to the action. Remarkably, Spain also gambled by removing shot-stopper Quico Cortes and got their reward, grabbing a superb volleyed equaliser from Alvaro Iglesias with three minutes remaining. New Zealand’s gamble to remove their goalkeeper for a second time backfired, as Pau Quemada robbed a defender before walking the ball into an unguarded net.

“We suffered a little bit in the third quarter, when they played really well and we were not creating anything”, said Quemada post match. “We brought on the kicking back and it changed everything. It was definitely the game of the kicking back.”

In Pool B, Germany sealed first place with a 2-0 win against Ireland, who finished the pool phase in third place. Belgium completed their Pool B campaign with a comfortable 9-1 victory over hosts South Africa, a result which ended South African hopes of a place in the quarter-finals, with Egypt taking the fourth and final qualification spot.

Germany (WR: 3) were made to work hard for all three points by Ireland’s Green Machine (WR: 9), who made life difficult for Die Honamas throughout. Tom Grambusch’s scored a penalty corner drag-flick near the end of the first quarter, but were made to wait until ten minutes from the end of the match before adding a second thanks to an open play strike from Martin Zwicker.

“I’m delighted that we won and finished top of the group”, said Germany captain Mats Grambusch. “A few weeks ago we lost 4-2 against Ireland in Hamburg, so we knew it was going to be tough. They are a good opponent and very hard to beat.”

South Africa (WR: 15) came into their match against Rio 2016 Olympic silver medallists Belgium (WR: 5) knowing that only a win would be enough for them to overtake Egypt into the fourth quarter-final qualification position. Sadly, that dream was ended a Red Lions team that were almost untouchable at times, opening up a 7-0 lead before half time with Alexander Hendrickx, Nicolas de Kerpel, Thomas Briels (2), Sebastien Dockier, Loick Luypaert and Cedric Charlier the scorers. Dockier scored Belgium’s eighth just after half time before Matthew Guise-Brown netted for South Africa, but it was the Red Lions who had the final word when Gauthier Boccard added a ninth late on.