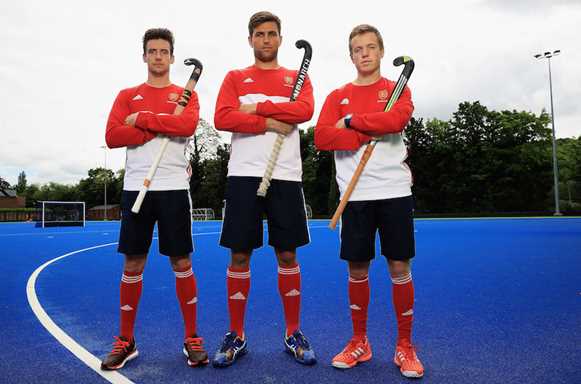 With all-time leading cap holder Barry Middleton making the personal decision to step aside from captaincy after the best part of a decade at the helm, Pinner, Roper and Sloan were voted in by their fellow internationals.

Head Coach Bobby Crutchley is evolving the performance environment with a completely revised leadership and captaincy structure, and there was a strong desire across the players and staff to have greater levels of player accountability, responsibility and shared ownership. As a result, Crutchley and the player group decided to name three captains instead of one.

The new structure has already been successful when put in place for the Sultan Azlan Shah Trophy in Malaysia, when Crutchley’s GB team became the first British side to win the trophy in 23 years, defeating Australia in the final.

With the Men’s Hockey World League Semi Final in London next month, the first challenge is a significant one - to qualify for the World Cup. The tournament from 15 to 25 June takes place at Lee Valley Hockey and Tennis Centre, and features England, Scotland, Olympic champions Argentina, Holland, India & Pakistan to name a few. World Cup qualification is a key goal and the athletes will be looking to perform at their best in front of London crowds.

Head Coach Bobby Crutchley said, “We have named a captaincy group that represents the shared responsibility, accountability and ownership of the full squad. These three players were voted in as a result of their different qualities and have the full backing of the squad, the staff and myself. Irrespective of the captaincy group, we share common goals and accountability, and everyone will play their part.

“I would like to wish George, Phil and Ian the very best of luck and of course I would also like to thank Barry Middleton for his leadership and captaincy over the years. We are very fortunate to have him with us as one of the best players in the world, and I know his leadership qualities will be as prevalent as ever.”

Performance Director Ed Barney added, “We are constantly looking to evolve, and with more than 30 players in our central programme, we believe there is huge value in thinking creatively about how we maximise the strengths that lie within the squad. The concept of a single figurehead who takes responsibility for everything is hugely dated in this day and age – this revised model will allow us to maximise and leverage the shared strengths across the squad.

“This structure will see us through the rest of our major events in 2017 and we will look to keep evolving it beyond then. It underpins what we are trying to achieve as a squad, and the culture we are looking to engender. So far in 2017 England have performed well in South Africa, and Great Britain were successful in Malaysia, so there are positive signs and we now look to build upon those.”

Goalkeeper Pinner hails from Ipswich, and has 118 caps to his name for both England and Great Britain. He was a reserve for the 2012 Olympic games in London, and then played in every fixture in last year’s Rio games. The 30-year-old Holcombe player has four senior medals to his name, including bronze in the 2014 Commonwealth Games.

Chester-born Roper, 25, is widely regarded as one of England and GB’s most skilful players, and he has 59 caps to his name, with 12 goals. He helped Wimbledon to national league titles in both 2015 and 2016, and has played for England in both World League Finals and Commonwealth Games, winning bronze in Glasgow in 2014.

At 23, Sloan is the youngest of the captaincy group but has great experience for his age. A native of Northern Ireland, he is part of a huge hockey family, with his mother and father both playing for Ireland. He was the youngest player in the GB squad in Rio, and he has three goals for the nation from his 36 caps. Has an encyclopaedic knowledge of the sport, and has played in the World League Final, Champions Trophy as well as Olympic Games.

Pinner, Roper and Sloan are now aiming to be a key part of the England squad that takes part in the Hockey World League Semi Final in London from 15 to 25 June at Lee Valley Hockey and Tennis Centre. World Cup qualification is at stake, and with England & Scotland both taking on some of the world’s best teams, it’s certain to be another memorable event at the home of hockey.