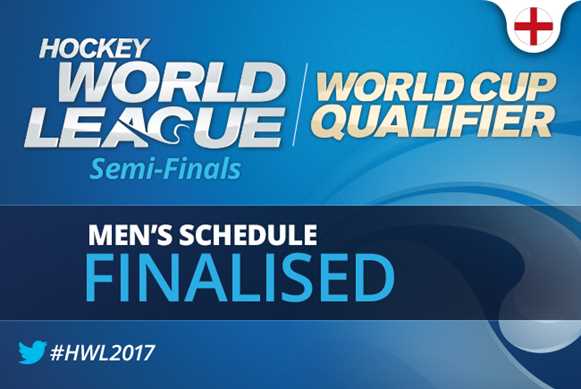 The International Hockey Federation (FIH) has announced the finalised schedule of the men’s Hockey World League Semi-Final 2017 in London, England following the allocation of Round 2 qualifiers last week.

‘Super Sunday’, 18 June, is bound to set pulses racing with one of sport’s fiercest rivalries resuming. The first game of the day pairs Pakistan with India and with 11 Olympic titles between them this is bound to be a thrilling encounter. Follow that up with hosts England going head to head with the Argentina, the number one team in the FIH Hero World Rankings, tickets will be in hot demand.

There’s many more exciting matches throughout the week, with the full schedule published on the official event website here.

Considering London’s multi-cultural population, the announcement of the full fixture list will no doubt see a rise in interest in tickets as communities turn out to cheer on their favourite teams in the iconic setting of Queen Elizabeth Olympic Park.

‘Super Sunday’ is already proving popular amongst fans along with the crucial quarter-final, semi-final and final matches as well. Fans are therefore being urged not to miss out on what will be one of this year’s greatest sporting events featuring historic sporting rivalries and the world’s top men’s hockey teams. With tickets beginning at just £2.50 for children and £10 for adults, fans can buy tickets by visiting the official ticket site by clicking here.

A number of hospitality packages are also available for those looking to entertain clients or enjoy a memorable day out with family and friends. VIP hospitality, including the best seats in the house, are included and can be purchased by clicking here.

The Hockey World League, composed of four rounds and played over two years, shines a spotlight on the sport around the world. Even the smallest hockey-playing nations have the opportunity to write their own chapter in hockey’s history books. London provides the perfect stage for their dreams to become reality in what is a crucial event in hockey’s international calendar.

Depending on final standings, teams will also be awarded FIH Hero World Ranking points, which could prove crucial in relation to qualification for future events. With so much on the line, fans will no doubt witness some action-packed matches full of excitement and drama this June.