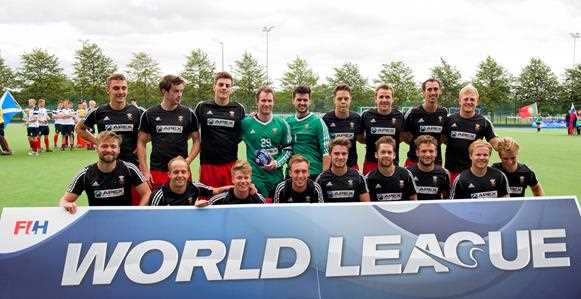 Four men’s teams and one women’s team have taken one more step towards top tier international hockey after achieving automatic qualification for the next round of the Hockey World League.

In Glasgow, it was Wales men who made all the running as they emerged unbeaten in four games. The final placings came down to the last game as host nation Scotland had also won all their games to that point.

Wales took an early lead through two penalty corners from Gareth Furlong and that meant it was a long way back for the Scots. Dale Hutchinson added a third for Wales before half time while Kenny Bain and Alan Forsyth scored for Scotland to make it 3-2 with seven minutes to play. It was an exciting finale as Scotland tried to find the equaliser but Wales held on to take maximum points from the competition.

The result means Wales and Scotland progress to Round 2.

In Accra, Ghana men and women booked their places through to HWL Round 2 after both sides remained unbeaten in their respective competitions. Kenya and Nigeria finished second and third in both events with Namibia men finishing in fourth place.

In the men’s competition, Ghana got off to the dream start as they beat Namibia by a crushing 7-1 scoreline, which put them in confident mood as they faced Kenya. This was a much closer affair with Ghana’s Salya Nsalbini’s ninth minute penalty corner producing the only goal of the game.

Nigeria looked to have the beating of Ghana on the final day of action. Michael John’s goal in the 14th minute kept Nigeria ahead until the final 15 minutes of play. Ghana hit back, first through Emmanuel Ankomah and then Shadrack Baah, to complete a successful tournament.

Constant Wakhura of Kenya was the competition’s top scorer with four goals.

The Ghana women’s team has been on a steady upwards trajectory over the past two years and this was borne out in their matches against Nigeria and Kenya.

Goals from Susanna Danquah and Janet Adampa saw them cruise past Nigeria 2-0 in the opening game of the event, then a single goal from Racheal Bamfo was enough to see off the challenge of Kenya.

Kenya had been involved in a thrilling seven goal match the previous day when they beat Nigeria 4-3, with Audrey Omaido scoring in the final minute of play to give Kenya the three points and secure second place in the competition.

Austria stormed to an emphatic victory in the HWL Round One event in Antalya, Turkey. The team that were favourites going into the competition justified their world ranking of 22 as they beat the host nation in an exciting 3-2 game; put nine past Oman to win 9-4 and then thrashed Qatar 14-2.