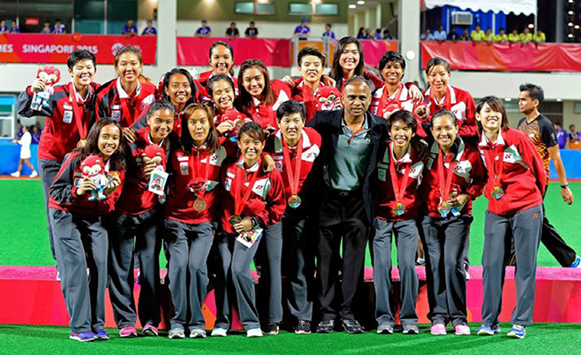 The Singapore women's team, which won bronze during the 2015 South East Asian Games, will be looking for inspiration from the home support Photo: Sport Singapore

The third Hockey World League will burst into action on 9 April in Singapore as nine men’s teams and seven women’s teams get ready to begin an exciting hockey adventure as they set off on their long journey to qualification for the 2018 Hockey World Cup.

The beauty of the Hockey World League is that it opens opportunities for new, as well as established, hockey nations to make it all the way to the top. The prize for the teams finishing top in Singapore will be qualification for Round Two and the potential to play on an ever-expanding global hockey stage.

The women’s event will consist of a round-robin. The teams taking part are: Kazakhstan, Thailand, Hong Kong, Sri Lanka, Brunei, Cambodia and Singapore.

This is the second time that Singapore has hosted a Round One event and the hockey-loving nation is fast proving itself a hockey hub. The two-pitch Sengkang Stadium has also hosted three of the top women’s teams in world hockey, the Netherlands, Germany and Australia, when the TPG International Tri-series was held at the stadium in January this year.

Singapore men and women will be hoping that they can improve upon the silver and bronze medal that they won respectively in the final of the South-East Asia Games, that took place at the Sengkang Stadium last year.

The men, who are ranked 38th in the FIH World Rankings, lost to Malaysia in a shoot-out after holding the regional giants to a draw in regulation time.

For the Hockey World League event, China men will be the top-seeded team. They are currently 19th in the world rankings. The only other men’s team in the top 50 is Sri Lanka, ranked 42nd. Hong Kong is ranked 52nd, Kazakhstan is ranked at 76th and the other teams are currently unranked.

The top two teams of the men’s tournament and the top three in the women’s event will qualify for the next round, so the battle for the top places will be fierce. The final placements in the Hockey World League also impacts world ranking points, so all teams will be determined to finish as high as they can in the competition.

Talking about the enthusiasm to host hockey events in Singapore, the Singapore Hockey Federation (SHF) President Mathavan Devadas said: "We have hosted two World League tournaments - one men's and one women's - in the past, and this time we've offered to host both together.

"The International Hockey Federation (FIH) is familiar with the venue, our organisational capabilities and the track record that we have in previous tournaments. The Sengkang Stadium is a legacy item from the 2010 Youth Olympic Games and, with the two international-grade pitches there, it has proven to be a very good venue for international events," Devadasi added.

The first Hockey World League event of the 2016-2018 season runs from 9-17 April. The opening matches will see Hong Kong women take on Brunei, while the first men’s game is Thailand versus Brunei.

For all the information, visit the FIH event page by clicking here.

Hockey World League
Launched in 2012 and played every two years, the World League acts as another avenue for nations to qualify for the 2018 FIH Hockey World Cup (in addition to those qualifying as continental champions and the World Cup hosts). World ranking points are also at stake. The competition will be played over four rounds, with the first round featuring teams ranked 20th and below in the FIH World Rankings (dependent on number of entrants), with the top three men's teams and top two women's sides from the tournament qualifying for Round 2.