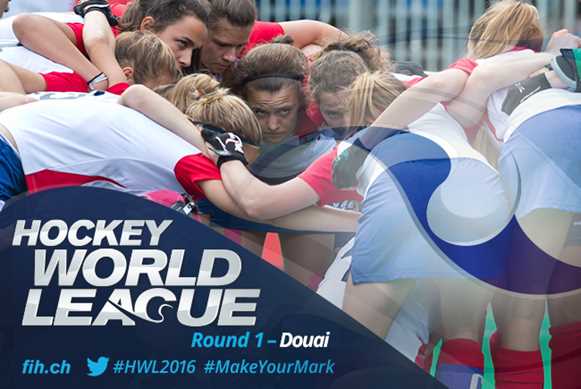 Between Tuesday 13th and Sunday 18th September, the beautiful, historic town of Douai in northern France will play host to the fifth of seven women’s Hockey World League Round 1 events, with five international teams beginning their quest to achieve a dream qualification for the 2018 Hockey World Cup in London, England.

The top three finishers in Douai will each earn a ticket to the second phase, the stage of the competition where the teams placed 12-20 in the FIH Hero World Rankings will begin their journey on the Road to London. The teams ranked 1-11 enter the competition in the Semi-Final stages (Round 3), where those coveted berths at the Hockey World Cup are up for grabs.

As both the host nation and the competition’s top ranked side, France will be considered by some as favourites. However, they have selected a very young side for the event, with nine teenagers including 16-year-old Yohanna Lhopital being part of the group. It is clear that France are building for the future, and Head Coach Cedric de Taeye will be hoping his young charges can repeat the success they had in Round 1 of the 2014-15 season, where they claimed a first place finish in Hradec Kralove (CZE).

Lead by outstanding captain Kristine Vukovich, Austria are certainly capable of going a long way in this season’s Hockey World League. Like France, they too have selected some rising stars of the game, including talented 15 year olds Helene Herzog and Fiona Felber. Russia arrive in Douai with plenty of experience and will see themselves as serious contenders, while Wales – who sit just two places behind them in the World Rankings – will also fancy their chances. Switzerland are the lowest ranked team in the competition but will see this event as a fantastic opportunity to prove themselves against supposedly superior opposition. Excellent development work in Switzerland has lead to an big increase in the number of female players, which is fantastic news for hockey.

On Tuesday (13 September), Russia and Switzerland will get proceedings underway when they meet at 15:45 (Central European Summer Time), with Austria and Wales taking to the field at 1800. Home favourites France play their opening game on Wednesday 14 September, with Switzerland being the opponents.

You can keep track of the results from Douai on the official event microsite, with FIH.CH bringing a full summary of the action upon the completion of the tournament.

Fast-paced and action-packed, the Hockey World League is the tournament that gives hockey fans the chance to see their team go all the way to the World Cup and Olympics. Composed of four rounds and played over two years, the Hockey World League shines a spotlight on the sport around the world. Even the smallest hockey-playing nations have the opportunity to write their own chapter in hockey’s history books. More information about the Hockey World League and the upcoming events can be found by clicking here.

Women’s Hockey World League Round 1 – the story so far…