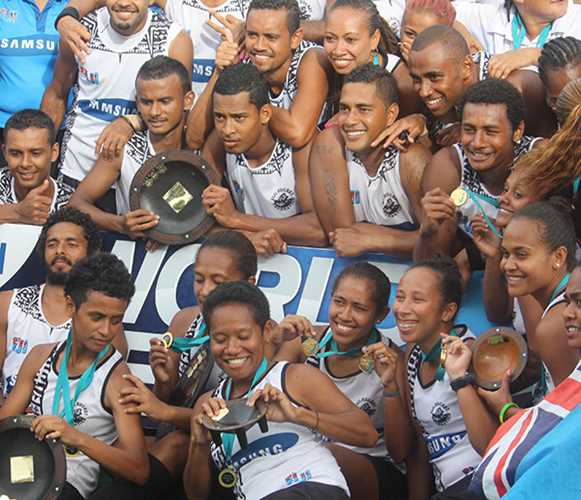 The Hockey World League Round One event in Fiji comes at a time when the South Pacific Island is recovering from devastation after cyclone Winston struck in May.

The cyclone was a category five, the second largest such storm recorded in the world. It affected 40 percent of the Fiji population – wreaking havoc across the northern third of the main island, the southern part of the second island and 187 islands in between.

With 40,000 people still living in temporary accommodation and the country’s infrastructure struggling to deal with the needs of its people, the Fiji Hockey Federation would have been forgiven for asking for the Hockey World League Round One to be hosted by another nation. But this is a resilient people and this is the power of sport to mend.

The government of Fiji has insisted that all sporting events organised in the country are to go ahead as it is good for the morale of the citizens after such devastation to their lives.

The Hockey World League Round One event, taking place from the 27 June - 2 July, is the fourth sporting event to be held in Suva since May. Each event has been supported by the Fiji National Olympic Committee, with additional financial aid coming from the International Olympic Committee, via the Olympic Solidarity programme. Much of the financial aid has been channelled into rebuilding facilities and buying sports equipment.

Dr Robin Mitchell, member of the Oceania National Olympic Committees (ONOC), explained how some of the aid was being used: “The ONOC is working with the Fiji NOC and the Fiji Ministry of Education to deliver basic equipment to over 200 schools that were affected by the cyclone. Some schools have already received equipment from generous donors from Australia and New Zealand. We will be providing hockey equipment (sticks, balls and pads) to four of our major hockey schools that were severely affected by the cyclone as well as hockey equipment packs for other schools in the affected area.”

With repair work on facilities taking place across the country, the nine teams participating teams will be playing for a coveted place in Round Two of the Hockey World League when they meet at the National Hockey Centre in Suva.

Papua New Guinea, Solomon Islands, Tonga and Fiji have both a men’s and a women’s team in the competition, while Vanuatu is fielding just a men’s team. As Mitchell noted, all the participating nations have been affected by the recent cyclones.

The opening match of the event sees the host nation take on the Solomon Islands. Fiji has a FIH Hero Hockey World Ranking position of 63, so will be favourites for the men’s competition. The next highest ranked team is Papua New Guinea (67), with Vanuatu ranked 81st. Tonga and Solomon Islands are unranked.

In the women’s competition, Fiji will again start as favourites. The team ranked 51st in the world will play the unranked Solomon Islands in the first game of the competition. Papua New Guinea is the only other team with a ranking – 59.

The Hockey World League Round One format for this event is the increasingly popular Hockey5s, and the teams will be playing one or two matches a day over the course of the competition.

The event has been well supported by the Oceania Hockey Federation, with regular visits and support from OHF and FIH officials to ensure that the event will run smoothly, despite nature’s best attempts to disrupt proceedings.

To keep up to date with all the latest action from this event, click here.