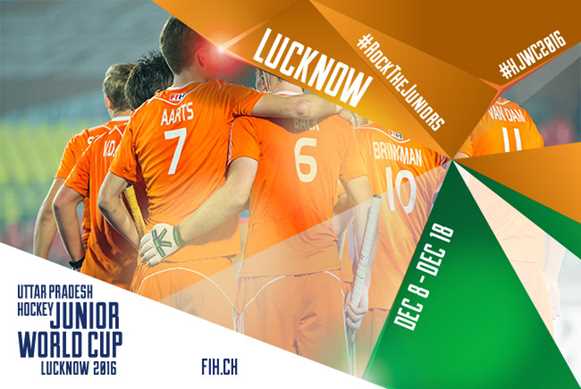 Germany, Spain, Belgium and the Netherlands triumph on Day 2

On day 2 of the men’s Uttar Pradesh Hockey Junior World Cup 2016, Germany became the first team to reach the quarter-finals while Spain, Belgium and the Netherlands were also winners at the event currently taking place in Lucknow, India.

The Pool A contest between Argentina and Austria kicked off proceedings, with Austria claiming a surprise draw against the junior world champions of 2005. Argentina dominated for long spells and deservedly took the lead when Tomas Domene fired home a backhand effort in the 47th minute. However, the Austrians claimed a share of the points seven minutes from time thanks to Oliver Binder’s low and powerful penalty corner drag flick. “We had a lot of chances but we couldn’t score, and that is a problem for us,” said Argentina captain Maico Casella after the match. “We have some things we need to work on.”

The day also witnessed the first matches in Pool B, with Belgium and the Netherlands both claiming convincing victories. Belgium made light work of African champions Egypt with a convincing 4-0 triumph. The Red Cougars scored two goals in each half, with Philippe Simar, Henri Raes, Alexandre van Linthoudt and Gregory Stockbroekx all on target. The Netherlands were in ruthless mood in their meeting with Malaysia, powering to a 7-2 win. Bram van Groesen scored twice, with Thijs van Dam, captain Thierry Brinkman, Terrance Pieters, Daniel Aarts and Jorrit Croon also registering.

In Pool C, Germany sealed a place in the quarter-finals thanks to a 2-1 win over New Zealand, who will next face Spain – winners against Japan – in a battle for a quarter-final berth. A fine penalty corner effort from Sam Lane gave New Zealand an early lead, but Germany turned the match around with strikes from Timm Herzbruch and man of the match Anton Boeckel. Earlier in the day, Spain were in top form in their 4-1 win against Japan, with Lucas Garcia Alcade netting a double alongside efforts from Marc Serrahima and Pablo de Abadal. The concluding matches in Pool C take place on Sunday 11th December, with Germany playing Japan before Spain and New Zealand face-off for a place in the quarter-finals.