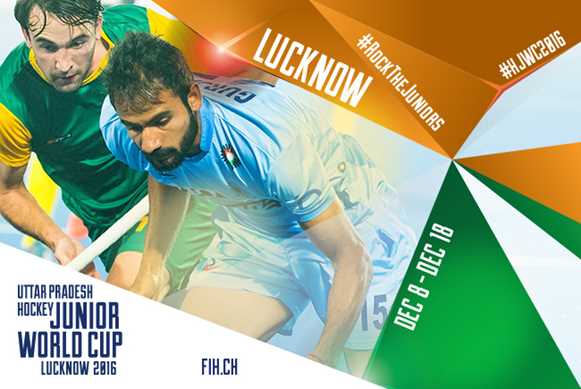 Australia, Argentina, Belgium, the Netherlands and host nation India all confirmed their places in the Quarter-Finals of the Uttar Pradesh Hockey Junior World Cup Men Lucknow 2016 on an absorbing fifth day of play. The five teams join Germany and Spain, the respective first and second placed finishers from Pool C, in the knock-out stages, with only one Quarter-Final position left to be filled.

Although the match order and timings are yet to be decided, we now know that Pool A winners Australia will face Pool B runners up the Netherlands. Pool D winners India and Pool C’s second placed Spain are also a match-up, with Belgium and Argentina – whose senior teams competed in the Olympic final at Rio 2016 – also going head to head. Pool C winners Germany are still awaiting their opponent, which will be revealed at the close of play on Tuesday (13th December) following the completion of the pool phase.

In Pool A, Australia and Argentina both sealed their places in the Quarter-Finals of the competition, with Australia finishing the day as the pool winners with a game still to play. The Burras overcame a strong challenge from surprise package Austria to emerge 4-2 winners, with Joshua Simmonds, Lachlan Sharp, Blake Govers and Jack Welch all on target in the win. “It was slow to get going in the first half but it was coming, we just needed to stay patient and focus on what we were doing”, said Australian Olympian Blake Govers after the match. “In the second half we did that and actually let them off the hook a little bit at times. I think we could have bettered that performance, but we will keep building ahead of the Quarter-Finals.”

That result left Austria sitting second in Pool A with four points, meaning that Argentina needed to win their match against Korea by three clear goals in order to leap-frog the Austrians and snatch the ticket to the Quarter-Finals on goal-difference. The South American continental champions achieved their target in impressive style, overpowering their Asian opponents with a 5-1 victory. Argentina were on fire in the first period, establishing a 3-0 lead inside 14 minutes thanks to efforts from Martin Ferreiro, Tomas Domene and Thomas Habif, with Nicolas Keenan adding another just before the break. A Park Joohan strike reduced the arrears six minutes after half time, but Keenen grabbed his second and Argentina’s fifth to complete the scoring and seal that all important Quarter-Final place. Despite that achievement, Argentina captain Maico Casella was far from satisfied. “Yes, I’m happy that we won and to score four goals in the first half was very good, but we still missed a lot of chances and we need to correct that.”

Pool B was also settled on Monday, with Belgium taking first place ahead of the Netherlands, who finished second. The Netherlands moved temporarily into top spot with a 7-0 victory over Egypt, scoring three goals in the first period and four in the second. First half goals from Thijs van Dam, Jip Janssen and Bram van Groesen established a strong lead for the Dutch, with Thierry Brinkman, Sebastian van der Graaf, Janssen again and Noud Schoenaker completing the rout. The Dutch were quickly bumped down into second in Pool B by Belgium’s Red Cougars, who proved too strong for Malaysia to claim a third successive win. Gregory Stockbroekx gave Belgium an early lead before Quentin van Lierde doubled the advantage ahead of half time. Thomas Verheijen’s 55th minute penalty corner put the result beyond all doubt.

The final match of the day was in Pool D, where India defeated South Africa but were made to work hard for their win. A passion-filled crowd were thrilled when India captain Harjeet Singh rifled home in the 11th minute, but a penalty corner from Kyle Lion-Cachet ahead of half time levelled the scores at the break. Mandeep Singh scored the winner with 15 minutes of the match remaining, sending the crowd into raptures and sealing top spot in the pool. Although not their best performance of the competition, the home favourites are gathering momentum here in Lucknow and will be hoping to continue their winning run in the Quarter-Final phase.

On Tuesday (13th December), the final matches of the pool phase will be played to complete the line-up for the quarter-finals. England take on Canada in Pool D in a match that will decide the last qualifier for the Quarter-Finals.  In Pool A, table toppers Australia take on Korea.