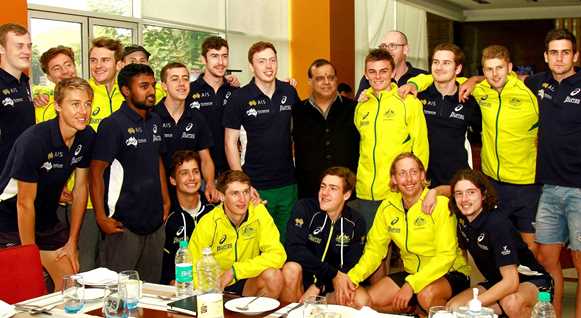 With just a matter of days before the start of the Uttar Pradesh Hockey Junior World Cup Men Lucknow 2016, FIH President Dr Narinder Dhruv Batra arrived in the host city and spent the day assessing preparations for what promises to be a thrilling festival of top class hockey.

“Lucknow is known for the legends it has produced in world hockey and I am extremely happy with the preparations”, said FIH President Batra on Sunday (4 December), impressed by the immense effort that had gone into the arrangements so far. “This is beyond expectations and I would like to thank the government of Uttar Pradesh for their full support. The event will definitely help put Lucknow city on the world map.”

During his day-long visit, Dr Batra also made time to meet some of the teams that have already arrived in the city, including Australia, Austria and India, the hosts. As well as these three competing teams, the Uttar Pradesh Hockey Junior World Cup Men Lucknow 2016 will also feature Argentina, Belgium, Canada, England, Germany, Japan, Korea, The Netherlands, Egypt, New Zealand, Malaysia, South Africa and Spain all doing battle for the title.

Tickets for the event are still on sale and can be purchased by clicking here. The full results, standings, images and more will be available on the official website on FIH.ch whilst further coverage will be provided via FIH Twitter, Facebook and Instagram using the hashtags #HJWC2016 and #RockTheJuniors.