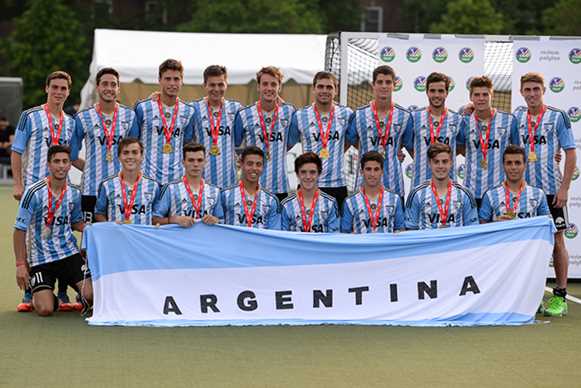 Following an exciting 10 days of hockey in Toronto, Canada at the men’s Junior Pan-American Championship, the field is now set for the Hockey Junior World Cups taking place later this year.

At the final men's continental qualifier, the men's Pan-American Championship, Argentina continued its domination of the event after beating all opposition by an incredible combined goal tally of 62 goals, with none conceded. Canada had hopes of denting the Argentinian’s progress in the final, but in the end, they too lost as they went down 5-0. This is the 11th consecutive gold medal for the Argentina side, who remain unbeaten since the tournament began.

In the final, Argentina took an early lead, with captain Maico Casella opening the scoring through a penalty stroke. The lead was doubled when Nicolas Keenan tapped the ball in from some excellent build-up play.

The second half saw Argentina gradually wear down the Canadian defence with Tomas Domene, Casella and Agustin Bugallo all finding their way onto the score sheet. The result means Casella was the tournament’s highest scorer and the icing was on the cake for the Argentina captain when he was also named Player of the Tournament.

Guyana took seventh place after defeating Puerto Rico 4-2. A brace for Aroydy Brandford of Guyana was enough to condemn the Puerto Ricans to their sixth defeat of the competition.

Argentina and Canada now have seven months to prepare for the biggest stage for junior hockey. It is an event that Argentina won in 2005 and were silver medallists in 2001.

Germany are the men's reigning champions and also the team with the best record at the event – with six titles to their name. Netherlands women are the reigning women's Hockey Junior World Cup champions.