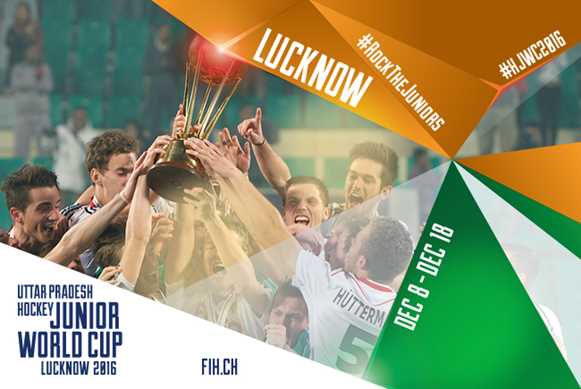 Following the conclusion of the women’s Hockey Junior Hockey World Cup in Santiago, the focus now switches to India in preparation for the Uttar Pradesh Hockey Junior World Cup Men Lucknow 2016, which gets underway this Thursday (8th December).

It is the second time that India has played host to the men’s Junior World Cup, having also done so in 2013 when a young Christopher Rühr inspired Germany to a second successive title at the event in New Delhi. Germany are bidding for their third successive men’s Junior World Cup title, but must fight off 15 of best junior nations on the planet if they are going to succeed as the next generation of global hockey stars look to make their mark.

With four teams fighting it out for two available quarter-final places in each of the four pools at Lucknow’s superb Major Dhyan Chand Hockey Stadium, every single match has meaning and one slip-up could prove costly. Here is a look at the teams competing in each pool.

Australia
1997 Junior World Cup winners Australia are one of the favourites to win the 2016 edition, and arrive in Lucknow full of confidence following their title success at the recent Sultan of Johor Cup 2016 in Johor Bahru, Malaysia. The champions of Oceania progressed through the event undefeated, with senior internationals Tom Craig and Blake Govers – an Olympian at Rio 2016 – both scoring six times for the ‘Burras’. Josh Beltz is another player with senior international experience, adding extra quality as the team chase their second Junior World Cup title.

Argentina
The Argentina squad that won the Junior World Cup in 2005 contained numerous players who went on to become Olympic gold medallists at Rio 2016, most notably team captain Pedro Ibarra and attacking star Lucas Vila. This new generation of Argentine talent will be aiming to replicate the achievements of the class of 2005, and their journey starts right here in Lucknow. Team captain Maico Casella and penalty corner expert Tomas Domene are both prolific scorers, netting a combined total of 34 goals during Argentina’s Junior Pan-Am Championship success in Toronto, Canada earlier this year.

Korea
A third place finish at the 2015 Junior Asian Cup in Kuantan, Malaysia was enough to secure Junior World Cup qualification, beating Japan to take the bronze medal. Seo Woohyeon and seventeen-year-old goalkeeper Kim Jaehan were both members of the Korea squad that competed in the Hero Hockey Champions Trophy in London earlier this year, experience which could prove vital to their title challenge.

Austria
Austria make their first ever appearance in a men’s Junior World Cup, and find themselves in a very tough group. However, under the guidance of hugely experienced Indian coach Cedric D’Sousa, you can be sure that the team will be well drilled and determined to cause some shock results. Oliver Binder, Franz Lindengrün, Pit Rudofsky and team captain Leon Thörnblom were members of the Austria senior side that claimed a first place finish at the Hockey World League Round 1 event in Antalya, Turkey in September.

Netherlands
The Netherlands, winners of the European Junior Nations Championship 2014 in Waterloo, Belgium, are an ever-present nation in the men’s Junior World Cup, having participated in each edition since the inaugural competition in 1979. Despite medalling on four occasions, the Dutch are still awaiting their first men’s Junior World Cup title, something that they will be determined to rectify here in Lucknow. The team is packed with talent, with Rio Olympian and 2016 FIH Rising Star of the Year nominee Jorrit Croon, captain Lars Balk and Thierry Brinkman – who competed at the 2013 Junior World Cup in Delhi and is the son of double Olympic gold medallist Jacques Brinkman – all having the ability to change games in an instant.

Belgium
Belgium secured their place in Lucknow with a fourth place finish at the European Junior Nations Championships 2014, which was played on home soil in Waterloo. They were denied the bronze medal by England, who claimed the win courtesy of a shoot-out. In October of this year, the young Red Lions team finished third behind India and Germany at a Four Nations Invitational event in Valencia, Spain, where attacker Gregory Stockbroekx finished as joint top scorer.

Malaysia
Malaysia - who accepted a late invitation to replace Pakistan - have produced some strong performances in previous editions of the Junior World Cup, having come close to a podium finish on three separate occasions. In 2013, the team were beaten to the bronze medal by the Netherlands. The majority of the team selected for this event competed in the recent Sultan of Johor Cup, where Malaysia finished in fifth place. The team ended the competition with two successive victories over New Zealand, and will be aiming to continue that winning streak here in Lucknow.

Egypt
Egypt come arrive in Lucknow as the junior continental champions of Africa thanks to their success at the Junior African Cup 2016 in Windhoek, Namibia. The team were defeated by fierce rivals South Africa in the pool phase of the competition, but gained revenge in the competition final when Mohamed Nasr’s 55th minute field goal gave the Egyptians a 3-2 victory. The team is captained by Abdelrahman Kasem, who is playing in his second Junior World Cup after competing at the 2013 event in Delhi as a 17-year-old.

Germany
Six times champions Germany are attempting to win their third men’s Junior World Cup in a row, following their successes at 2013 and 2009. They arrive in Lucknow with a high quality group of players that includes senior Germany internationals Lukas Windfeder and team captain Constantin Staib as well as striker and 2016 FIH Rising Star of the Year Award nominee Timm Herzbruch, a bronze medallist with Germany at the Rio 2016 Olympic Games. The team is coached by Valentin Altenburg, the man who guided Germany’s men to the bronze medal in Rio.

New Zealand
New Zealand will be looking to bounce back from their recent last place finish at the six-nation Sultan of Johor Cup, where the team lost all six of their matches. Despite that disappointment, there is little doubt that the squad selected for Lucknow has plenty of quality. David Brydon, Sam Lane, Brad Read, Leo Mitai-Wells and Dominic Newman all represented the senior Black Sticks squad that competed in November’s Ford Trans-Tasman Trophy against Australia.

Spain
Spain are participating in their tenth Junior World Cup, having earned qualification with a fifth place finish at the 2014 European Junior Nations Championships in Waterloo, Belgium. Their best ever Junior World Cup display came in 2005, where the team took the bronze medal at the event in Rotterdam. A fourth place finish at the recent Four Nations Invitational competition against Germany, Belgium and India on home soil in Valencia was certainly not ideal preparation, but the team are widely expected to be back at their best in Lucknow.

India
As champions of Asia, host nation India will be rightly considered as one of the favourites for the title in Lucknow. The team is packed full of high quality individuals, including senior internationals Harmanpreet Singh (another nominee for the 2016 FIH Rising Star of the Year award), Mandeep Singh, goalkeeper Vikas Dahiya, captain Harjeet Singh and Ajit Panday. With over 60 senior international appearances, 21-year-old striker Mandeep is the most experienced player of the squad, having represented his country at numerous major events including the Rabobank Hockey World Cup 2014 and the Hero Hockey Champions Trophy 2016.

England
The European bronze medallists have named a strong side for Lucknow, featuring 14 of the athletes who came fourth behind Australia, Pakistan and Japan at the recent Sultan of Johor Cup, where Will Calnan and Jack Clee both scored three goal each. Jonty Griffiths, James Alberry, Chris Proctor and James Gall, the captain, are competing in their second successive Junior World Cup, having all been part of the squad that finished 14th three years ago in New Delhi.

Canada
Canada got off to a poor start at the Junior Pan-Am Championship on home soil in Toronto earlier this year, losing to Mexico before winning four successive matches to seal a place in the competition final. Argentina proved to be just too strong for the Canadians in the gold medal match, but they had done enough to secure their Junior World Cup ticket. Team captain Brandon Pereira and Kabir Aujla both scored four times for Canada on the way to their silver medal in Toronto and will be looking to continue the fine form in Lucknow. 16-year-old Rowan Childs is the youngest player in the competition.

South Africa
South Africa qualified for their fifth successive Junior World Cup with a silver medal at the Junior African Cup in Windhoek, Namibia, falling to a narrow 3-2 defeat at the hands of Egypt in the competition final of the continental championship. Ace striker Nqobile Ntuli, Tevin Kok, Charles Bowren and team captain Alex Stewart have all represented South Africa’s senior team, experience which could prove vital in their Junior World Cup campaign.

Tickets for the event are still on sale and can be purchased by clicking here. The full results, standings, images and more will be available on the official website on FIH.ch whilst further coverage will be provided via FIH Twitter, Facebook and Instagram using the hashtags #HJWC2016 and #RockTheJuniors.