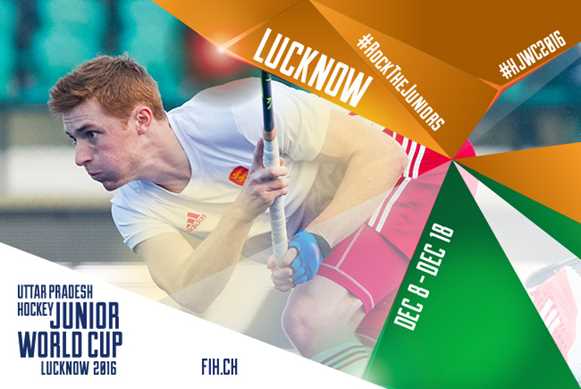 England became the eighth and final team to qualify for the Quarter-Final stages of the Uttar Pradesh Hockey Junior World Cup Men Lucknow 2016 thanks to a convincing victory over Canada.

The 6-0 score-line, in which Edward Horler scored a hat-trick, confirmed a second-place finish in Pool D which sets up a last eight meeting against reigning champions Germany, the winners of Pool C.

As well as the Germany versus England fixture, Pool A winners Australia face a huge clash with Pool B runners up the Netherlands, while Pool D winners India and Pool C’s second placed Spain will also go head to head. Belgium and Argentina, whose senior teams competed in the Olympic final at Rio 2016, is another fascinating Quarter-Final match-up.

Following the completion of the Pool phase, the match order and timings for the Quarter-Finals, which take place on Thursday 15th December, have been revealed. All times local (Indian Standard Time GMT/UTC +5.30).

The Pool D meeting between England and Canada was the first match of Day 6, with the European side producing a dominant performance to confirm a Quarter-Final berth. Will Calnan and Ed Horler both scored twice in the first half to take the score to 4-0, with Horler completing his hat-trick with his third penalty corner effort of the day in the 46th minute. A superb backhand volley from Chris Proctor in 54th minute finished the match scoring. “It was all about going out there and doing a job, as a lot of people were talking about the Quarter-Finals but we knew Canada would be a tough side and we had to get the job done,” said England captain James Gall after the match. Regarding the Quarter-Final meeting with Germany, Gall said: “You know what you get with them, we have played them a lot. They are a good side, but we will debrief this performance, plan for the next match and have a really good go at them.”

The pool phase was ended by Australia, who made it three wins from three matches in Luckow with a 5-0 triumph over Pool A opponents Korea. The Asians managed to keep the Burras off the score-sheet for 25 minutes before Frazer Gerrard slammed home a penalty corner, with Blake Govers netting a quick-fire double just before half time to take the score to 3-0. Max Hendry and Kirin Arunasalam were also on target for an Australia team determined to land their first Junior Hockey World Cup title since 1997.