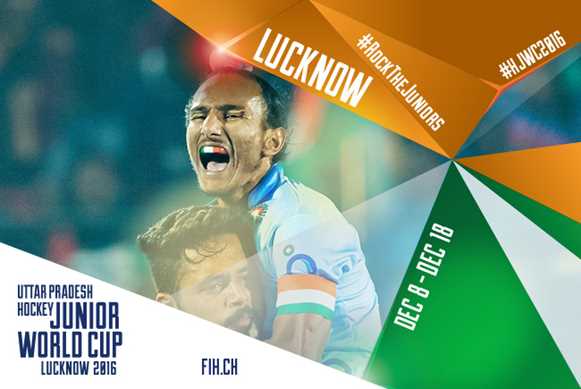 Belgium, Germany, Australia and India were all winners on Quarter-Final day at the Uttar Pradesh Hockey Junior World Cup Men Lucknow 2016, meaning that the Semi-Final fixtures are now known.

Belgium overcame Argentina to set up a Semi-Final meeting with reigning champions Germany, who defeated England in the second Quarter-Final of the day. The Dutch wait for a first men’s Junior World Cup title continues after being beaten by Australia in the third Quarter-Final, with the Burras now facing a Semi-Final showdown with hosts India, who overcame Spain.

The competition Semi-Finals will take place on Friday (16th December), with Belgium playing Germany at 15:45 (India Standard Time – UTC / GMT +5:30) before Australia and India take to the field at 18:00.

The first Quarter-Final match saw Pool B winners Belgium given a stern test by Pool A runners up Argentina before eventually triumphing in a shoot-out. Belgium had the better of the first half chances but found Argentina goalkeeper Emiliano Bosso in fine form to make a series of excellent saves to keep the Red Cougars off the score-sheet. Argentina threatened on the counter-attack throughout the first period, and it was they who took the lead early in the second half when team captain Maico Casella smashed a volley off the underside of the crossbar from close range. Bosso continued his brilliance throughout the second period and even saved a penalty stroke before Belgium eventually got their leveller, with Belgium captain Victor Wegnez scoring two minutes from the end to send the match into a shoot-out in which Belgian shot-stopper Loic van Doren excelled. Van Doren was beaten only once, with Nicholas Poncelet, Arthur de Sloover, Wegnez and Henri Raes scoring the goals to put Belgium into the Semi-Finals. “It is a fantastic feeling”, said Belgium captain Victor Wegnez after the match. “We have been working on shoot-outs a lot because we lost in the European Cup two years ago in the Semi-Final and also the bronze medal match against England, so it was very important for us and we did a fantastic job.”

Belgium’s opponents in the Semi-Final will be reigning junior world champions and Pool C winners Germany, who survived an impressive fight-back to emerge as 4-2 winners against England, the second place finishers in Pool D. Goals from Jan Schiffer and Lukas Windfeder gave Germany a 2-0 lead at the break before Florian Scholten made it 3-0 with 18 minutes of the match remaining. England coach Jon Bleby removed his goalkeeper in the latter stages and it was a decision which was instantly rewards, with competition top scorer Ed Horler netting twice in two minutes to drag the team back into the match before a breakaway goal from Olympian Timm Herzbruch sealed the victory for Germany. “I was very concerned”, said Germany coach Valentin Altenburg, referring to England’s late rally. “You could see that the game slowed down, they scored a penalty corner and they were suddenly alive again. I think that we were a little bit too much in the semi-finals in our heads, so I was concerned. We really needed that fourth goal and I’m very happy that we actually made it.”

The third Quarter-Final of the day was a bruising battle between Pool A winners Australia and Pool B runners up the Netherlands, with the Burras sealing their Semi-Final spot with a 2-1 triumph. Australia took the lead thanks to a wonderful piece of skill from Kirin Arunasalam, who produced a brilliant touch in front of Dutch goalkeeper Maurits Visser to find the net. Blake Govers squandered a gild-edged chance to double the advantage from the penalty spot just before half time, and it proved costly when Jip Janssen slammed home a penalty corner drag flick midway through the second half. The Australians were not to be denied, however, with Jack Welsh firing home a close-range winner following some persistent work along the backline from man of the match Lachlan Sharp. “It is going to be great to play in the Semi-Final of the Junior World Cup”, said Sharp after the match. “They are always tough opponents, the Dutch, but we were lucky enough to come away with the win.”

With a massive crowd watching the final match of the day, Pool D winners India were determined to impress the home fans in the Major Dhyan Chand Hockey Stadium and started brightly, but it was Pool C runners up Spain who ended up taking a 1-0 lead into half time thanks to a penalty corner drag-flick from Marc Serrahima. Spain were superb defensively, keeping the dominant Indians at bay until the 57th minute when Simranjeet Singh finished off a penalty corner rebound to spark a deafening cheer from the crowd. With four minutes remaining, the winning goal arrived thanks to a fine penalty corner effort from Olympian Harmanpreet Singh, who produced his best drag-flick of the day to send India into the final four.