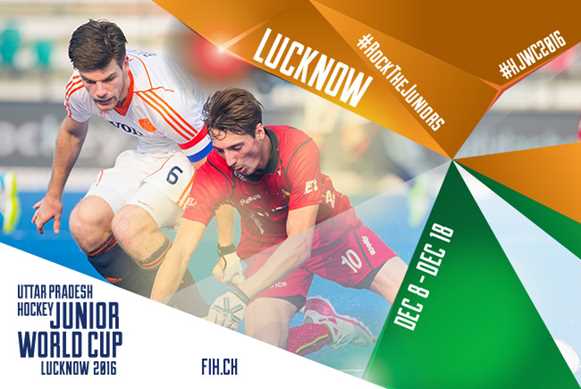 Belgium and Spain write the headlines on Day 4 in Lucknow

It was another entertaining day at the Uttar Pradesh Hockey Junior World Cup Men Lucknow 2016, with Belgium and Spain writing the headlines at the Major Dhyan Chand Hockey Stadium. It was also a good day for Germany and Malaysia, who were both winners on Day 4.

Germany made it three wins from three matches to guarantee a first place finish in Pool C thanks to a convincing 6-1 triumph over Japan. The reigning champions produced their best performance of the competition with Constantin Staib opening the scoring before Anton Boeckel scored either side of half time to make it 3-0. Thies Ole Prinz, Timm Herzbruch and Lukas Windfeder completed Germany’s scoring before Japan captain Ryo Ozawa grabbed a consolation. "We were not so happy with our first two performances [against Spain and New Zealand], and this was our last test to get ourselves ready for the quarter-finals”, said Boeckel, who sits at the top of the scorer’s table with four goals. “We really wanted a better atmosphere on the pitch, and that is what we did today.”  As the winners of Pool C, in the quarter-finals Germany will meet the team that finishes second in Pool D.

Germany were joined in the quarter-finals by Spain, who claimed a second place finish in Pool C in dramatic circumstances - a last minute draw against New Zealand to denied the junior Black Sticks a place in the knock-out stages. A 66th minute strike from Dylan Thomas gave New Zealand a 3-2 lead and one foot in the quarter-finals, but Jan Lara Rosell netted two minutes from full time to give Spain the draw that they needed to progress. Spain will face a quarter-final match against the side that finishes top of Pool D, a position currently held by host nation India.

The day also featured action in Pool B, with the Netherlands falling to a narrow defeat at the hands of Belgium while Malaysia proved too strong for Egypt. A fortuitous goal from Terrance Pieters gave the Netherlands the lead against Belgium three minutes after half time, but Thomas Verheijen levelled the scores before Quentin van Lierde showed lightening reflexes to move the Red Cougars ahead with a fine close range finish. Parity was restored thanks to Bram van Groesen’s penalty stroke, but a wonderful deflection from Henri Raes in the closing stages sealed the win for Belgium. “It is always nice to beat the Dutch and it was a really important pool match”, said Belgium captain Victor Wegnez after the match. “Maybe the last goal was a bit lucky as I think he [Henri Raes] had his eyes closed, but I think we deserved it.” The result put Belgium top of Pool B, while Malaysia’s 2-0 victory over Egypt moved them level on points with the Netherlands with one round of matches remaining. Goals in each half from Mohamad Zulhamizan and Khaliq Hamirin gave the Malaysians all three points.