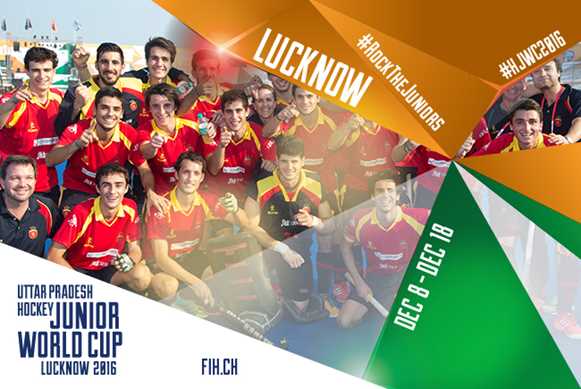 Argentina and Spain to play for fifth place in Lucknow

Argentina and Spain were the big winners on Day 10 of the Uttar Pradesh Hockey Junior World Cup Men Lucknow 2016, seeing off the respective challenges of England and Argentina to set up a meeting in the 5/6 Place play-off match.

Pan American champions Argentina were in excellent form in the first of the 5/8 Place play-off matches, cruising to a 3-0 win over England. Following a goal-less first half, Argentina took the lead five minutes after the break thanks to a smart finish from Nicolas Acosta after a powerful run and pass down the right from Agustin Rios. Fifteen minutes later, Acosta went from goal-scorer to provider with a perfect pass across the face of goal for Ignacio Nepote, who tapped into an open goal from close range. Argentina’s captain Maico Casella completed the match scoring nine minutes from the end of the match, driving down the right and entering the circle before producing an outrageous chipped finish over onrushing England goalkeeper Chris Wyver. “We are so happy because we played very good today”, said Casella, who has undoubtedly been one of the stars of the tournament. When asked about his feelings surrounding his superbly taken goal, Casella said: “I am pleased with it, but the most important thing is that the team won, so I’m very happy right now.”

Spain’s 2-1 victory over the Netherlands in the second of the 5/8 Place play-off matches was hard earned, with Spanish captain Enrique Gonzalez impressing yet again with a man of the match performance. Spain opened the match scoring in the 30th minute when Llorenc Piera Grau slid in to force home from close range. Lucas Garcia Alcalde made it 2-0 for the Spaniards with backhand strike which would prove to be decisive. The Netherlands were much improved in the second period but still found life tough going against their European rivals. A moment of individual brilliance from Jorrit Croon in the 64th minute pulled the Dutch back into the contest but, despite a late strike being disallowed, it was not enough to save them from defeat.

In the 9/10 Place play-off, South Africa were defeated 4-1 by New Zealand, with man of the match Mark Wilcox scoring two early goals to help his team along the road to victory. Brad Reid and Dylan Thomas also scored in a dominant first half performance, with Courtney Halle scoring South Africa’s only goal of the game two minutes after half time.

Austria produced a valiant fightback in their 11/12 Place play-off match against Malaysia, but were ultimately denied in the shoot-out. Mohamad Zulhamizan and Aiman Nik Rosemi established a 2-0 lead for Malaysia after just 14 minutes, but goals either side of half time from Oliver Binder and Peter Kaltenböck levelled thing up before Malaysia edged the shoot-out 2-1 to claim an 11th place finish.

On Sunday (18th December), the action starts with England versus the Netherlands in the 7/8 Place play-off at 11:15 (India Standard Time – GMT / UTC +5:30), with Argentina and Spain doing battle for 5th place at 13:30. Germany and Australia will compete in the bronze medal match at 15:45, which takes place ahead of the mouthwatering title match between first time finalists Belgium and 2001 title winners India at 18:00.