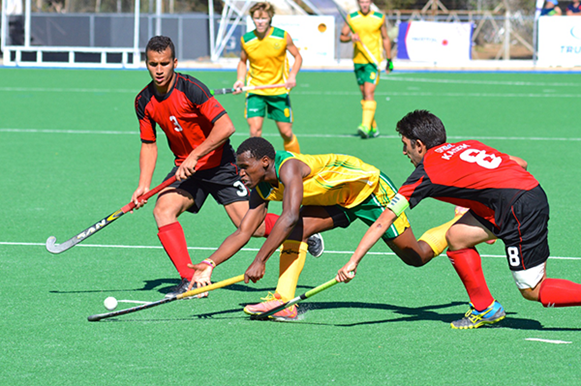 While the best senior teams in the world are preparing for the Rio 2016 Olympic Games, the next generation of hockey stars will have their own moment in the spotlight at the end of the year when the Hockey Junior World Cups get under way.

Over the past few months a number of continental qualifiers have taken place which have decided who will compete at these Junior World Cups, the women's hosted in Santiago, Chile from 24 November to 4 December and the men's in India from 1-11 December. With several coveted places still to be won, the attention turned to Africa over the past few days, before the focus shifts on to the Pan-American region this week.

On the African continent, the men’s and women's Junior African Cup was held in Windhoek in Namibia between 18-28 March.

In the men's event, Egypt demonstrated once again why they are a nation that is on the rise when it comes to hockey. The north African side reversed an earlier 2-0 loss at the hands of South Africa in the pool matches to win 3-2 in am exciting final.

In that game, the Egyptian team rushed into a 2-0 lead with goals from Mohamed Ali and Ahmed Arafa in the 14th and 22nd minute. South Africa fought back with a goal from Nqobile Ntuli just after half time.

It was all South Africa for the next quarter and Ntuli struck again to even the scores. However, with five minutes left on the clock, Egypt once again seized the initiative and Mohamed Nasr was on hand to shoot home the winner from open play, giving Egypt their first gold medal in this event.

Zimbabwe beat Namibia 5-3 in the bronze medal match while South Africa's Ntuli and Egypt’s Ahmed Elganaini were top scorers with 14 goals a piece.

The women’s Junior African Cup was a clear-cut victory for South Africa. They beat Namibia, Zimbabwe and Tanzania in a round-robin format to emerge as the gold medal winners. Zimbabwe finished in second place to take the only other automatic qualification spot for the Junior World Cup in Chile.

South Africa's Marie Louw was top scorer with 14 goals, closely followed by Tarryn Glasby on 13. In all, the South Africa team scored 63 goals and conceded none.

Who will be representing the Pan American region will be decided through two events: the women’s event gets under way on Thursday 31 March in Trinidad and Tobago, while between May 20-28 the men are off to Toronto in Canada.

Eleven women’s teams will be competing at this year’s Junior Pan-Am Championship and with the Rio Olympics taking place on the continent just a few months later, there is bound to be increased interest in this event, especially with Hockey Junior World Cup places at stake.

The Junior Pan-Am Championships started in 1988 for the women and in that time, it has been an almost total Argentinian domination. The South American side has been beaten only once, by the USA in 2008.

Going into this year’s event, Argentina women will hope to continue winning ways. Their coach, Agustin Corradini said: “The young players who are selected at junior international level are already well on their way to being the ‘finished’ article. When they get selected for the national team, they have already been part of very good development programmes within their own clubs. We make sure that they have all the elements in place and then work with those qualities to make them even better – as a result our players have very good technical skills, they are perfectly physically trained, and they have a professional mindset.”

Canada’s coach is Steph Andrews and she makes no bones about Argentina’s ability. “Argentina, historically, have always been classy. Their ability to be creative and play with flair makes it hard for teams to match up against them and stop their flow. Any team that is going to beat Argentina will need to be good defensively and take their opportunities when it counts.”

However, Andrews also believes that Canada is catching up on their South American rivals at junior level. She pinpoints developing depth within the junior squad as being key to this. She said: “I believe we are establishing a good group under our senior team both at a junior national squad level and the development squads below that, all of which will aid in closing the gap between us and Argentina.”

The opening day’s matches of the women’s Junior Pan-Am Championship will see the reigning champions Argentina open their defence against Uruguay. Chile take on Barbados, Canada face Mexico and the 2008 winners USA will compete against the host nation Trinidad and Tobago.