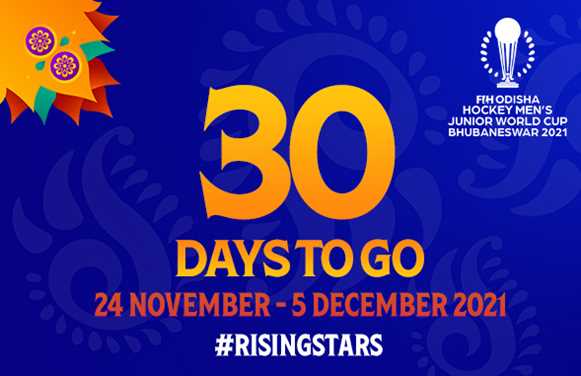 The event, featuring many of the world’s best junior players from 16 nations, takes place in the Kalinga Stadium, where many a dramatic hockey event has been played out.

Names that have gone onto achieve greatness on the international senior stage have made their entrance via the Junior World Cup. Germany’s Christopher Ruhr first made his goalscoring prowess known at the 2013 Junior World Cup where he was top scorer and Germany took gold.

In 2016, India were gold medallists on home soil in Lucknow. The newly crowned FIH Player of the Year Harmanpreet Singh was an instrumental part of that team.

World Cup winners in 2018 and  Olympic gold medallists from Tokyo 2020 Arthur de Sloover, Victor Wegnez and Antoine Kina were all part of the silver medal-winning Belgium team in Lucknow.

For the host nation, this Junior World Cup could not come at a better time. Bronze at the Olympic Games Tokyo 2020, alongside a fourth place for the women’s national team has raised excitement around the sport to fever pitch in the hockey mad country. Yashdeep Siwach is just one of a number of players hungry to retain the title.

Germany won the EuroHockey Junior Championship Men in 2019 with a side that contained many athletes who have now tasted Olympic hockey with the senior team. Expect players such as Alexander Stadler and Linus Müller to tap into all that experience as they push for a seventh title.

Netherlands, Spain, Belgium and France finished in third, fourth, fifth and sixth place respectively at the EuroHockey Junior Championships. For the Dutch team, a win in Bhubaneswar would end a long wait for a gold medal, while the Belgium team will be hoping to emulate the senior men with a first title. Spain’s highest finish from 11 appearances at the Junior World Cup is a bronze in 2005, while France stunned the world in 2013 when they won silver, a feat they would love to repeat, particularly with Paris 2024 just around the corner.

Poland enter the fray after England withdrew due to Covid-19 related complications. The Polish team last competed at the Junior World Cup in 2009 and will be grasping this unexpected opportunity to show their skills on the international stage.

Egypt and South Africa were both nominated by the African Hockey Federation after the Men’s Junior Africa Cup 2019 was cancelled due to Covid-19 complications. The nominations were based on the results of the 2016 Junior Africa Cup. Egypt are perennial qualifiers for the Junior World Cup, with their most recent – Lucknow 2016 – producing their best finish (10th). South Africa’s captain Guy Morgan, is hoping his team can turn heads in the same way that the senior men’s team did in Tokyo.

The Pan American Hockey Federation quartet has some history makers, some late minute opportunists and some title contenders in their number. Both USA and Canada were nominated as reserve teams and so were able to take their places when Australia and New Zealand withdrew due to Covid-related international travel restrictions in those two countries. USA are coached by USA all-time great Pat Harris, so expect a well-prepared team despite the late entry. Canada have the highly skilled Jagpreet Singh in the squad – a player capable of shining even on this elite stage.

Chile men won the Junior Pan American Championship for the first time in their history, breaking Argentina’s hold on the competition. The Chile team, with ace goal scorer Andres Pizarro in their midst will go to India high in confidence.

Argentina won gold in Rotterdam 2005 and were fifth in Lucknow. The loss to Chile in the continental qualifier may well act as a motivating factor for the young lions.

Pakistan, Malaysia and Korea all enter the tournament in Bhubaneswar after being nominated by the Asian Hockey Federation. Pakistan have a proud history at this event, winning the inaugural Junior World Cup and finishing on the podium in each of the first five editions. Since those heady days, Pakistan has not achieved so highly since but, with the players’ mercurial skills and resilience, they can never be written off.

The 2023 hosts, Malaysia and Korea are both regular participants at the Junior World Cup. Malaysia has competed in 10 of the 11 editions, while Korea have appeared eight times. Both teams would need a best ever performance to get onto the podium, but both sides have skilful and speedy players and cannot be underestimated.

The FIH Odisha Hockey Men’s Junior World Cup starts on 24 November when Belgium face South Africa in the opening match of the competition.