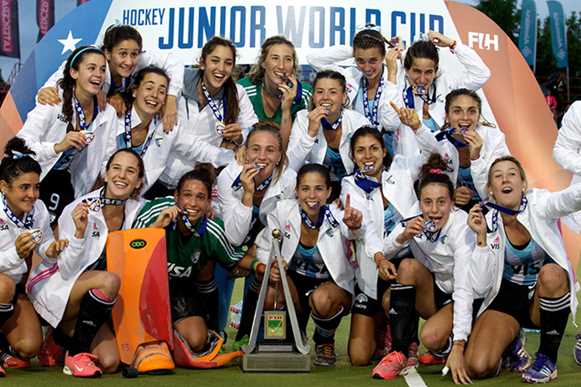 Argentina won the women’s Hockey Junior World Cup 2016 as they defeated Netherlands 4-2 in an exhilarating, high quality final in front of a capacity crowd in Santiago, Chile.

Earlier in the day, Australia claimed bronze in the 3/4 match against Spain; Germany defeated Belgium in the 5/6 encounter and England beat USA in the 7/8 match.

As a result the final standings from the event are as follows:

Here is a summary of the final day’s action:

Gold medal match: Netherlands 2, Argentina 4
A first gold medal in 23 years was just reward for the Argentina women's junior hockey team as they dazzled spectators, TV viewers and even their opponents to win gold on their home continent.

The match began in a scrappy fashion and the first real scoring chance didn’t come until 15 minutes into the game when Netherlands midfielder Maxime Kerstholt batted the ball mid-air at Maria Rossetti in the Argentina goal. Rossetti dealt with it and just seconds later her Dutch counterpart was in action foiling a swift Argentine counter-attack.

The game settled into a fittingly stylish showcase for the sport. The Netherlands played with grace and fluidity; Argentina were busy and imaginative. Both sides were uncompromising when it came to tackling.

The deadlock was broken when Imme van der Hoek shot past the Argentine goalkeeper to give Netherlands the lead but the goal did little to dent the cut and thrust of both teams as they continued to charge up and down the pitch.

Argentina equalised when Bianca Donati swept a penalty corner into the corner of the Dutch goal in the 27th minute. Shortly after there was no stopping Barbara Borgia as Argentina won a penalty corner on the stroke of half-time. The first shot was saved but Borgia was on hand to slam home and give her side a morale-boosting lead to take into the break.

This lead was further extended after half-time when Maria Ortiz pounced on an opportunity to score again and move her team one step closer to gold.

However, as all hockey fans know, giving up is not in the Dutch mindset and on the 50th minute Netherlands perseverance paid off as Pien Sanders was able to lift a rebounded penalty corner over the body of Rossetti to reduce the Argentine lead to just one goal.

With 20 minutes to go, the level of crowd noise increased as everyone in the stadium prepared for a hockey showdown.

Netherlands Kerstholt came agonisingly close to scoring the equaliser from a penalty corner but her ferocious shot just flew wide of the post.

The Dutch continued to attack the Argentina circle but with players such as Agostina Alonso, Sofia Toccalino and Eugenia Trinchineti throwing themselves in front of the ball, this was a gold medal that Argentina were not going to handover easily.

An Argentina break from their own defence led to a foul and subsequent penalty stroke. Agostina Gorzelany made no mistake as she made it 4-2 and the large numbers of Argentina supporters in the stands started the party before the final whistle blew.

Speaking afterwards, Argentina's Lucia Sanguinetti said: "I think we deserved it as we played really well from the beginning of the event to the end. We are a great team, we played a great final. We knew it was going to be hard - Netherlands are a great, great team. We are so happy and excited to bring the gold to Argentina as it has been some time (since we last won it)."

Bronze medal match: Spain 1, Australia 1 (Australia won 3-1 in shootout)
Australia won bronze at the women’s Hockey Junior World Cup 2016, but they were made to work every inch of the way by a hard-working and skillful Spanish team. Despite large periods of pressure from Australia, Spain held the in-form Oceania giants to a 1-1 draw and took this exciting bronze medal match to shootout. Here the Jillaroos held their nerve as they won the penalty shoot-out 3-1. For Australia, this is the first medal at the Hockey Junior World Cup since 2001, when they also won bronze. Spain meanwhile secured their highest finish at this event in their history. Speaking after the match, Mariah Williams said: “Spain really gave it to us the whole game. Luckily we were good enough to put it away in the shootout.”

Germany 4, Belgium 3
A hat trick from Viktoria Huse and a commanding defensive performance from Hanna Granitzki and her fellow defenders meant Germany finished this edition of the women's Hockey Junior World Cup in fifth position. The battle for fifth place was fast-paced encounter between two of Europe’s finest. Belgium took the lead with just five minutes played through Stephanie Vanden-Borre. Viktoria Huse levelled things three minutes later through a penalty corner but Alice Weiker restored the Belgium lead in the 12th minute. Huse scored her second at the start of the second half, but then the game turned into a cagey match between two evenly matched teams. The deadlock was broken with another flurry of goals. Mathilde Raymakers put Belgium ahead in the 55th minute, then Huse scored her third – this time a penalty stroke – to bring the score to 3-3. The winning goal came with four minutes of the match remaining. Maxi Marquardt was the scorer, her shot rifling across the face of the Belgium goal to defeat 'keeper Elena Sotgui and put Germany ahead.

England 3, USA 1
​England won seventh place at the women's Hockey Junior World Cup 2016 at the expense of a hard-working USA. The 3-1 scoreline gave Craig Keegan’s team a bright finish to the end of their campaign. The two teams played out an open game of attack and counter attack. Both teams played expansive running games but a lack of direct and speedy passing created problems with maintaining possession for both. An even first half saw England move into the lead through a goal scored from open play by Esme Burge. England maintained that lead for just 10 minutes before Erin Matson evened things up with a well-taken penalty corner. After the half-time break, England came out the stronger and moved into the lead on the 41st minute when Lydia MacDonell scored a neat goal from open play. The lead was extended when Charlotte Daly struck a penalty corner past the outstretched leg of Kelsey Bing.