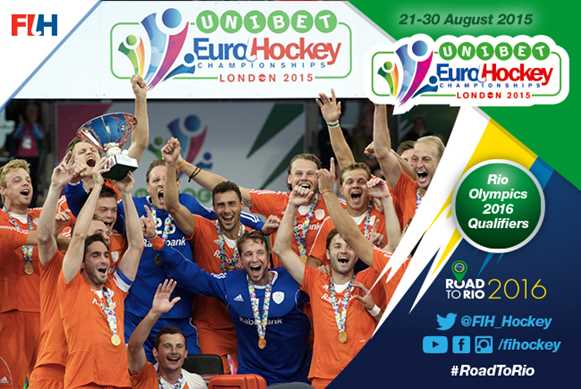 The Netherlands produced a staggering display of attacking hockey to power to a 6-1 victory over 2013 champions Germany and win the men’s title at the Unibet EuroHockey Championships 2015 in London.

Mink van der Weerden scored two penalty corners with Billy Bakker, Jeroen Hertzberger and Rogier Hofman also on target to give the dazzling Dutch a 5-0 lead at half time, with Mirco Pruijser making it 6-0 in the final quarter before Germany’s Christopher Rühr bagged a consolation goal for the reigning Olympic champions with ten minutes of the match remaining.

The result gives the Dutch their fourth European title, adding to the trophies collected at the 1983, 1987 and 2007 competitions and, with the Netherlands women competing in tomorrow’s final against England, sets up the possibility of a double success for Oranje.

Earlier in the day, Ireland men claimed their first ever major international medal with victory over host nation England in the Bronze medal match.

For more info on Saturday’s matches from the Unibet EuroHockey Championships, see below.

Gold: Netherlands 6-1 Germany
The Netherlands produced a truly sensational first half display to win the Unibet EuroHockey Championships final, claiming their first title since 2007 – the last time the competition was played in England.

It was their fourth continental championship and also the biggest ever victory in the final match as they tore through the German defences in an uncharacteristically one-sided contest.

Each goal before the break was a thing of beauty as Billy Bakker’s sixth minute opener set the tone before a pair of Mink van der Weerden corner strikes were augmented by pitch-length counter-attack moves completed by Jeroen Hertzberger and Rogier Hofman. Possibly the best was left until last when Mirco Pruijser ran the length of the pitch and crashed his shot past Jacobi.

The game drew to a close with both teams looking dead on their feet through exhaustion. A six match winning streak came to an end and the Netherlands can justifiably call themselves the champions of Europe.

Bronze: Ireland 4-2 England
History was made as the Irish team won the Bronze medal at the Unibet EuroHockey Championships after a battling last quarter which saw all 11 men camped in their own half protecting a 3-2 lead against England. A breakaway run in the final 30 seconds saw the Green Machine put the game to bed and win their first major international medal.

The final action saw Shane O’Donoghue slot home a penalty stroke past stand-in ‘keeper Mark Gleghorne, after the Ireland team had broken free from the England press around their circle. O’Donoghue’s goal was his second of the game, as Ireland produced another sparkling performance to fight back from 1-0 and 2-1 down before eventually getting their noses ahead in the 39th minute, when Eugene Magee fired home a penalty corner. For all their possession, England could not find a way past remarkable Ireland shot-stopper Davey Harte, who played a hugely influential role throughout the competition to help his team make history in London.

Speaking after the game, Ireland’s John Jackson said: “We have achieved something that will be very hard to replicate – a medal at the European Championships. England are a quality side, so we knew we had to stop them attacking down the central channels. Everyone worked so hard.”

Belgium 11-4 Russia
Belgium’s Tom Boon raced to the top of the Unibet EuroHockey Championship goal-scoring charts by scoring seven goals in an 11-4 win over Russia. The Red Lions, who are ranked fifth in the world, have had a disappointing campaign at the Championships, as they failed to reach the semi-finals after finishing third in Pool B but their comfortable win over Russia guarantees a fifth place finish, meanwhile Russia are consigned to relegation and will be playing in EuroHockey Championship II.

Speaking on the win and scoring seven goals, Boon said: “I’m happy with today’s win. We had to come back from a disappointing week. It’s nice to be top scorer but at the end of the day, it’s the team performance that counts. We are not happy with how we have performed at this tournament, but obviously for me,  it’s always nice to score.”

Spain 4-3 France
Spain scraped through in a thrilling finale, winning 4-3 in a hugely important encounter to maintain their place in the top tier. Defeat for the French condemned them into EuroHockey Championship II, whilst Spain was rewarded with another campaign in the top flight in 2017. Xavi Lleonart scored twice for the Red Sticks, although it was Salvador Piera’s 57th minute strike which proved decisive.

Spain’s Alejandro de Frutos Gomez said, “We were good at the start but suffered a lot late on but the most important thing is we survived the drop. We are scoring plenty of goals but importantly from now on, we must work on our defence as we are conceding too many goals.”