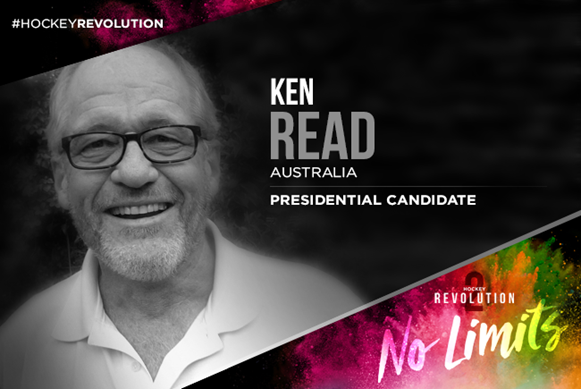 In the third of our articles introducing the candidates bidding to take on the role of FIH President, we profile Ken Read from Australia.

As a former national player (first Hockey Champions Trophy Lahore 1978), Coach at the World Student Games and National Team Manager, Ken Read knows all about the playing side of hockey. He remains an active player at club level on the field; no longer as a goalkeeper.

When his high-level playing days were over, Read turned to officiating and administrating the game, taking on roles with the Hockey Australia Board and International Hockey Federation (FIH).

Much of his time during the past few years has been spent working on an event model that will increase interest in the sport and result in increased viewing popularity and hence income to the game.

At present, Read is Chair of the Tasmania Hockey Board, a position he will resign if he is elected as President, as well as Chairing the FIH Event Portfolio Panel, FIH Event Evaluation Panel and FIH Competitions Committee.

Not only has Read played and coached the game, but he has also been a Technical Director at two men’s World Cup events and the 2008 Beijing Olympics. It is, he says, a clear example of his ability to lead a team to work collaboratively.

John Coates is Vice-President of the International Olympic Committee. Speaking about Read, he said: “For me, the most relevant strengths that Mr Read can bring to the Presidency, apart from being a President for all hockey playing nations, is his legal training and current practice as senior counsel, which provides a strong sense of ethics and governance; and, his chairmanship of key FIH Committees and Panels, which provides an excellent contemporary knowledge of the strategic direction and operational requirements of this most important Olympic International Federation.”

David Hatt, President of Hockey Australia, added: “Ken Read has been an outstanding servant to hockey for many years and in a multitude of guises. His influence has been felt throughout the sport, from his home state of Tasmania, across Australia and on the global stage through his roles with the FIH.”

Read, who has been Chair of the FIH Competitions Committee for the past eight years, says: “My vision is for the Hockey Revolution to fund the development of the game worldwide and to provide every young person in every nation with the dream that they can compete at the Olympics in the magnificent sport of hockey. I am committed to Chairing the FIH Board in a collaborative manner. In this way all continents will have a voice, everyone will be listened to. Our sport will benefit as a result.”

And with an acknowledgement to the turbulence surrounding many other sports at the moment, Read adds: “Sport is under threat, not only from drugs and gambling, but also from governance that is either incompetent or corrupt. I have a passion to ensure the highest standards of governance in our sport.”

For more information on the voting process, click here.