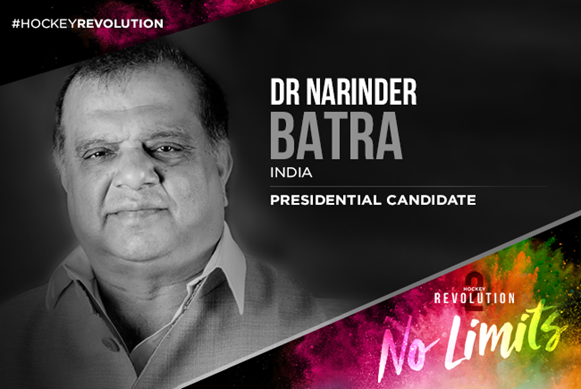 Dr Narinder Batra has been a highly active Office Bearer of Hockey India since he took up the post of Treasurer in 2009. A year later, he became the Secretary General and was elected as President of the National Association in 2014.

India has a long and proud tradition within hockey and, with eight Olympic titles to its name, the Indian men’s team remains the most successful hockey nation to compete at an Olympics.

India’s national sport went through a slump when they failed to qualify for the 2008 Olympics, however with both the men's and women’s teams qualifying for Rio 2016, there is every indication that India are returning to the glory of past days.

The Secretary General of Hockey India, Mohd Mushtaque Ahmad, says that much of the recent growth and development by Hockey India can be attributed to the contribution of Dr Batra. He said: “Dr Batra has been instrumental in the rejuvenation of the sport in India over the last five years. He is a committed and dedicated individual that has a deep passion for the sport.” That rejuvenation, under Dr Batra’s stewardship, includes a growth in income of Hockey India from $500,000 to $14,100,000 USD over a six-year period.

Ahmad adds that a strong business acumen is another strong attribute for the Presidential candidate, saying: “Dr Batra will bring his experience and knowledge to lead FIH into the next phase of growth.”

Dr Batra acknowledges the challenges of running the National Association of a sport that is so much part of the social fabric in India. He said: “It is an extremely complex environment that requires management of many stakeholders. In my role as Secretary General and President of Hockey India, I have had to provide strong leadership to ensure the growth of the sport.”

The Hockey India League, which is now approaching its fifth season, has been the brainchild of Dr Batra with his vision to bring together the best of hockey from across the world to give the right kind of exposure to players as well as fans. As Chairman of Hockey India League, Dr Batra carries the responsibility for providing a sustainable competitive structure, which in turn feeds into the development of hockey.

Batra has been an integral and involved member of the FIH having served on the FIH Competitions Committee and currently a member of the FIH Executive Board. He has also worked closely with the Indian Olympic Association (IOA) and was instrumental in the IOA being reinstated by the International Olympics Committee in 2013-14.

“Hockey is without doubt, along with my family, one of my strongest passions. If elected President, my vision is not only to grow the number of countries that play hockey but also to ensure that more countries are competitive and the best of the sport is showcased.”

For more information on the voting process, click here.