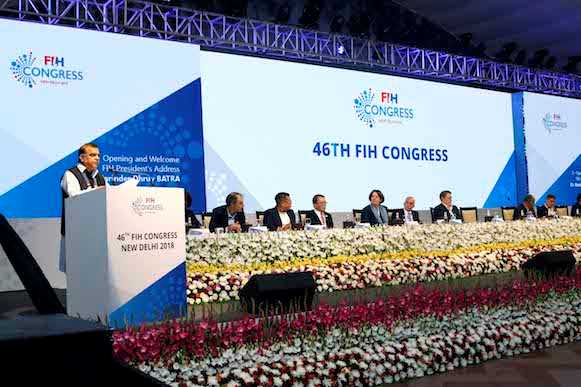 Key decisions made at 46th FIH Congress in New Delhi

New Delhi, India: The 46th FIH Congress, where some 250 delegates from all over the world gathered to discuss crucial matters regarding the global status and popularity of hockey, has drawn to a close at the Lalit Hotel on Saturday 3 November.

Meeting every second year, the Congress is the supreme body of the FIH and is where key strategic decisions are made for the development and governance of hockey globally, and the 46th edition was certainly no different with the launch of the new FIH Development Strategy taking centre stage.

The new development strategy – named ‘Hockey2024’ – puts the global promotion and development of hockey at the heart of all FIH activities, the purpose being to create long-term sustainable growth through the key pillars of Participation, Education and Infrastructure. Seen very much as ‘Evolving the Revolution’, Hockey2024 will feature heavily in all FIH events going forward, while the leadership and direction from FIH will also allow the Continental Federations and National Associations to drive forward new and existing development projects.

Two exciting new projects have been announced as part of the strategy. The ‘Hockey4Life’ project has been designed to encourage people of all ages and from all backgrounds to start, play and stay in hockey, which is crucial to the long-term sustainable growth of the game. The second project, ‘Sticks4TheWorld’, directly supports the first initiative by aiming to distribute 110,000 hockey sticks to new and existing Hockey4Life projects by the Tokyo 2020 Olympic Games.

Speaking about the launch of the Hockey2024 global development strategy, FIH Chief Executive Officer Thierry Weil said: “The development of the game is the number one mission of every International Federation. The revenues we generate as a Federation have only one goal: to develop hockey worldwide. I’m delighted that Congress has fully supported the strategy which the FIH has presented today in this crucially important area. This shall help our goal to grow the game on a sustainable manner.”

The election of four Ordinary Members of the FIH Executive Board – two women and two men – took place at the Congress, with the delegates naming Maureen Craig-Rousseau (TTO), Elizabeth Safoa King (GHA), Dr Michael Green (GER) and Shahbaz Ahmad (PAK) from the nine-strong list of candidates that had been nominated by the various National Associations. Trinidad & Tobago’s Maureen Craig-Rousseau and Michael Green of Germany were re-elected to the FIH Executive Board having both served recent terms, while Ghana’s Elizabeth Safoa King and former Pakistan international player Shahbaz Ahmad are newcomers to the board are newcomers, replacing Pamela Stuper (USA) and Marc Coudron (BEL). To see profiles of each member of the FIH Executive Board, please click here.

Elections also took place for the Athletes’ Committee, which consists of current and former hockey players who ensure that the athletes themselves have influence in the FIH decision making process. Mark Knowles (AUS), Rogier Hofman (NED), Janne Müller-Wieland (GER) and Carla Rebecchi (ARG) were all elected by fellow athletes as Regular Members, with David Harte (IRL) and Camila Caram (CHI) being elected as Liaison Members, who are required to be current players. They are joined on the Athletes’ Committee by Scott Tupper (CAN), Sreejesh Parattu Raveendran (IND), Kate Richardson-Walsh (ENG) and Jacqueline Mwangi (KEN), who were all recommended nominations by the Executive Board to give both gender and geographic balance. More information about the Athletes’ Committee can be found by clicking here. 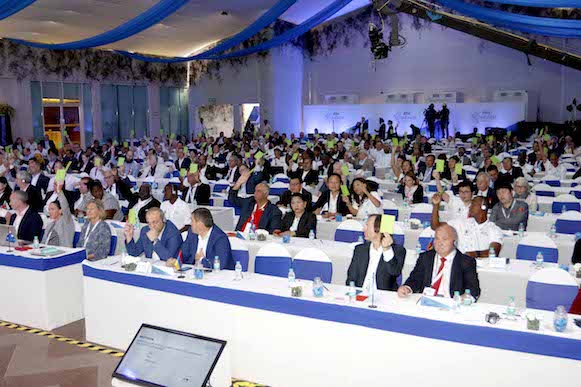 Moving away from development and elections, the National Associations of India and Uganda were revealed as the winners of this year’s FIH 2018 Olympic Day Awards. These Awards recognise Sport for All activities undertaken by FIH stakeholders on the occasion of Olympic Day, which is celebrated each year on 23 June. In 2018, 60 FIH stakeholders activated approximately 30,000 people to play hockey in more than 50 countries across the five continents. The programmes were highly inclusive, targeting people of all ages, abilities and backgrounds. To read more on this story, click here.

TV and Broadcast Director Andy Oram announced the 2019 launch of the ‘FIH.live’ platform, which will be designed to connect the hockey community – coaches, players, families, friends and fans. The focus of the platform will be ‘athlete first’, enabling us to share the best moments of every player in every team instantly live on social media and guarantees global visibility to all hockey matches played worldwide across all 137 nations.

In other important news, Comité National Algérien de Hockey’s application to become a recognized National Association was approved by Congress, with Algeria becoming the latest country to join the ever-expanding hockey family. The financial report and accounts were also approved, as were amendments to the FIH Statutes including retaining the clause regarding age limit of FIH Executive Board members in line with the practice of the International Olympic Committee (IOC). The President of the Judicial Commission, a group of neutral legal advisors that acts as mediator in FIH legal matters, was also ratified, with Annabel Pennefather continuing in the role that she took in 2017. 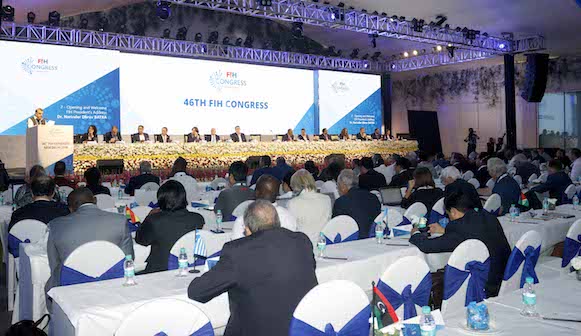 The 46th FIH Congress, which saw 112 National Associations in attendance, opened with FIH President Dr Narinder Dhruv Batra reflecting on the two years that had passed since the 2016 Congress in Dubai, before thanking all delegates for their work promoting and developing the sport in all territories. There was also a specially recorded video message of welcome from Thomas Bach, President of the International Olympic Committee, who praised the delegates of the FIH for their willingness to embrace the changes that have come through the Hockey Revolution, the strategy launched at the 44th Congress in 2014 designed to make hockey a global game that inspires the next generation.

"With the Hockey Revolution you have successfully set the course to adapt hockey to the fast-paced changes in our world", said Bach, who earlier this week was named as a recipient of the President’s Award. "I can only encourage you to continue on your chosen path of change and innovation, because by promoting hockey you are also promoting our common Olympic values across the entire globe. This Congress is therefore an important moment to look ahead and to ensure that the FIH is well equipped to drive the Hockey Revolution forward. As you set the course for the future of hockey, you can always count on the IOC as a partner by your side."

Closing the event, FIH President Dr Narinder Dhruv Batra said: “I would like to thank all delegates for their active participation in the 46th FIH Congress, which has been a hugely positive event for the future of the sport. Decisions have been made which will greatly benefit the long-term, sustainable development of hockey.”