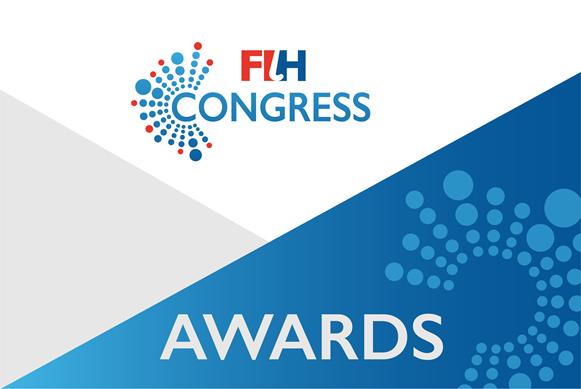 Today’s #HockeyInvites virtual conference organised by FIH as part of its 47th FIH Congress concluded with the FIH Honorary Awards giving recognition to numerous individuals, teams and organisations for their outstanding contributions to the sport of hockey.

The first prize to be ‘presented’ was the Pablo Negre Award to the Uzbekistan Hockey Federation, acknowledging its tremendous efforts to improve playing conditions through new infrastructure and the implementation of youth development models as the country strives to become a major hockey hub of Central Asia.

Another National Association honoured was the Polish Hockey Association, who picked up the Theo Ikema Award thanks to various hockey development projects resulting in 30 newly trained coaches and over 3000 schoolchildren being introduced to the sport within the country, while Hockey India was announced as the winners of the Etienne Glichitch Award in recognition of its remarkable contribution to the growth and development of Hockey.

As well as National Associations, numerous individuals were recognised in the awards.

Inspirational England and Great Britain striker Sam Ward – who suffered a career threatening eye injury in 2019 - was revealed as the recipient of the Super Fair Play Trophy René G Frank. It comes in recognition of his perseverance, dedication, and energy not only in his own recovery but also raising awareness of mental health issues and even volunteering his time to deliver food and medicines to his local community and supporting a young leukaemia patient, Alfie.

The Guust Lathouwers Memorial Trophy – for an individual who has made a significant mark on the development of umpiring – went to Croatia’s Ivona Makar, who was described as an outstanding umpire with a very bright future ahead of her.

Sharon Williamson of New Zealand was also honoured, being named as the winner of the HRH Sultan Azlan Shah Award for dedicating thousands of voluntary hours toward the delivery of New Zealand’s brand-new National Hockey Centre in Auckland.

The final award to be revealed saw His Majesty Sultan Abdullah Ahmad Shah, the current King of Malaysia, being named as an Honorary Member of FIH for his tireless efforts to promote and develop hockey. His Majesty Sultan Abdullah Ahmad Shah, who is the current Royal Patron of the Asian Hockey Federation, has initiated the regeneration of hockey in Asia and vowed to recreate its status as an extravaganza and symbolic sport on the Asian and global platform.

To see an overview of all FIH Honorary Award winners both past and present as well as background information about the prizes, please click here.

The FIH Honorary Awards took place on the opening day of the 47th Congress, with the Congress session itself taking place on Saturday 22 May. Hundreds of delegates from all over the world will connect in the first ever online Congress, where key strategic decisions are made for the development and governance of hockey globally.

The Congress agenda includes, amongst other items, elections for the position of FIH President and for four positions of EB Ordinary Member. More information about the agenda of the 47th FIH Congress can be found by clicking here.

Opening the 47th FIH Congress, FIH President Dr Narinder Dhruv Batra said: “It is a pleasure for me to welcome you to the Hockey Invites day, which is Day 1 of our two-day FIH Congress. First of all, wherever you are, I hope you and your beloved ones are keeping well and safe. This is by far the most important thing today. I look forward to fruitful discussions and I would like to thank everyone in advance for your participation.”

Today’s conference can be watched back in full on the Watch.Hockey app.