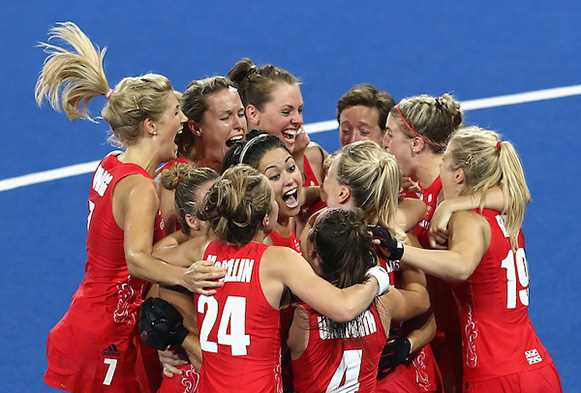 The Hockey Champions Trophy is the first competitive outing for Great Britain since they won gold at the Rio 2016 Olympic Games and, with David Ralph taking the role of stand-in Head Coach and a number of changes to the gold medal-winning team, this is very much an outfit with its eyes on the future.

Robertson is no stranger to the international set-up. She has 109 international caps, 15 for Great Britain and 94 for Scotland. She took a break from international hockey to concentrate on finishing her law degree but is now back in full-time training on the hockey pitch.

The trip to China will be her first major international with the Great Britain squad. “After playing in a few test series over the past few years it will be great to go to my first major tournament with the squad,” says the midfielder. “We have been training hard over the past six weeks and I am excited to see what we can produce against some of the world’s best teams.”

The Champions Trophy is also Amy Costello's first competition with Great Britain. The defender is bubbling with excitement at the prospect of mixing with the best teams in the world: "Words can’t describe how excited and honoured I am to have been selected for my first tournament with GB - and to be able to go to China and play against some of the top teams in the world is such a privilege.

"It’s great to be able to play against some of the best teams in the world as preparation for the FIH Pro League coming up and also to keep hockey growing. The more we can showcase our sport and publicise it the more our sport can progress."

The competition will be fierce in China. Although Great Britain go into the event as reigning Olympic Champions and the team ranked number two in the FIH Hero World Rankings, there are another five teams who all have equal reason to think they can come away with a medal.

“We qualified for the event as Olympic Champions, so it is a high calibre tournament and hopefully it will produce some brilliant matches,” says Robertson. “It is also a great opportunity for us to have matches of this standard ahead of the FIH Pro League starting next year.”

Like many of the players from all six teams, Robertson is aware of the sense of history surrounding the 23rd women’s Hockey Champions Trophy.

“As I think this is potentially the last Champions Trophy it is a special event. All the teams here would like to see their name on the trophy.”

Great Britain will be captained by Hollie Pearne-Webb as regular choice captain Alex Danson is missing the event through injury but, despite the absence of their inspirational goalscoring skipper, Costello says the squad is in a great place, playing exciting hockey and the preparations have been going well. "We are definitely ready to get out there and face the very best teams."

Both Costello and Robertson are excited at the prospect of playing in the unfamiliar environs of China. “I have never played in Asia before and I think it will be a great experience, not just from a hockey perspective but from a wider cultural experience," says Robertson. "Travelling is going to be a big part of the international calendar as part of the FIH Pro League so it’s a good opportunity for us to travel east and get accustomed to the challenges this presents.”

With just over a week before Great Britain open their Champions Trophy account with a match against the host nation China, Robertson is taking a long-term view on the outcome: “It would be special for us to win this tournament as it’s the first tournament we have played as Great Britain since the Olympics, and I think being the last ever winner of the Champions Trophy would be pretty cool, but I don’t think our success for this tournament will purely be judged on a gold medal given where we are at in our journey.”