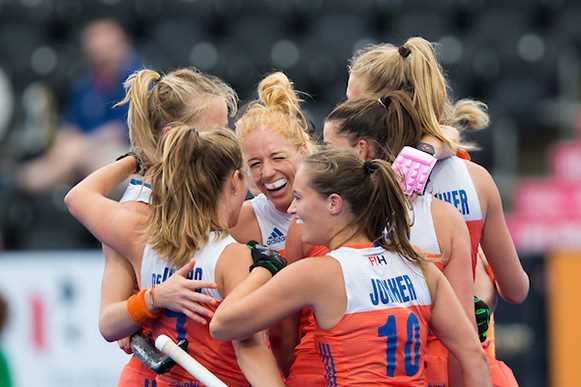 The Netherlands arrive in China for the Wanglibao Hockey Champions Trophy Changzhou Wujin 2018 as the team to beat. Currently ranked number one in the FIH Hero World Rankings and the reigning World Cup holders, they are undoubtedly a force to be reckoned with.

Head Coach Alyson Annan has rested some of her experienced players, bringing in eight players with fewer than 20 caps and two debutants – Renee van Laarhoven and goalkeeper Alexandra Heerbaart. However, there are also some very familiar names on the team sheet, including Eva de Goede, Margot van Geffen and Caia van Maasakker.

It is penalty corner specialist van Maasakker and her fellow defender Lauren Stam who took time out from training to speak to FIH about the forthcoming challenge in China.

"Aside from winning we want to be able to always play our game, grow as a team and sustain our team culture."  Caia Van Maasakker, Netherlands

“The Champions Trophy has always been a prestigious event in the hockey calendar,” says van Maasakker. “Top world teams compete at the highest level possible and it is such a cool event to be a part of. To be able to play every team gives a lot of information and is a great learning experience as a team.”

Stam agrees: “It is important that we are able to see how we compare and stand against the other teams. For me, it is also a great learning experience culturally. I've never been to China so I'm completely blank when it comes to knowing what to expect. Maybe the language: the Chinese characters can be challenging, but I'm sure it would be fine by speaking English.”

Despite being a member of the Dutch team since 2011 and with 150 caps to her name, this will also be van Maasakker’s first trip to China. “I am really looking forward to it. One challenge that we have to be aware of is the time difference; we arrive a short time before the tournament begins so we have to make sure we adapt quickly. Generally, we need to adapt to the new environment and take care physically so we are at our best during the tournament.”

Coming into the event, Stam says the team has been training together for the past six weeks. Before that, the players were with their club sides, playing in the fiercely competitive domestic league.

Van Maasakker has a strong attachment to the Champions Trophy, as she explains: “For me personally the 2011 Champions Trophy in Amstelveen was my first international tournament, so it has sentimental values for me. That first event was my standout moment at a Champions Trophy event. We were 3-0 behind in the final, but we came back and won the game on shoot-out. It was such a high to achieve this with my team in our home country.”

The Netherlands open their campaign with a clash against the lowest ranked team, Japan. And they will be looking to make sure they continue their long-running winning streak at major competitions, which goes back to the 2016 Olympic Games.

In a statement that exemplifies the Netherlands’ approach to any competition in which they participate, Stam says: “Personally I would like to win every tournament, or every game to be more specific. Even at home with my family and friends when we play games, I always want to win.”

Van Maasakker agrees: “As the Netherlands we always strive for the best and to win this strong competitive tournament is a boost as a team and confirms we are on the right track as a team.

“But, aside from winning we want to be able to always play our game, grow as a team and sustain our team culture. We work hard for each other and give it all every second of the game. This tournament we are competing with a relatively new team. You will see some new players which will give a fresh dynamic to the group and I’m really looking forward to sustaining our team culture and to see us grow as team.”