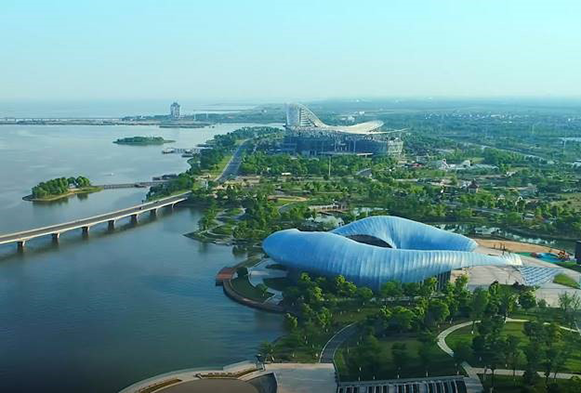 Six of the world’s best women’s hockey teams will be pitting their skills against each other to claim, what could be, the final Champions Trophy title.

For China, this is a chance to showcase its country’s ability to host a top flight hockey event. The last time a senior, global hockey event was held in the vast Asian nation was 2008, at the Beijing Olympics [Nanjing hosted the 2014 Youth Olympics]. The last Champions Trophy to be held in the region took place in 2002 when the autonomous region of Macau played host to the competition.

What can spectators and players expect when they arrive in Changzhou?

The city itself lies in the Jiangsu Province of the Yangtze Delta area. Shanghai lies to the east, while Nanjing is to the west. There are 160 daily high speed trains to Shanghai, taking between 50-90 minutes to cover the 165k journey. A regular train takes up to three hours.

The 23rd Champions Trophy is taking place in the tail-end of the Chinese Autumn. This means the weather will be moderate, with temperatures ranging from cool to warm, but not hot. This time of the year in Changzhou sees much less rainfall than during the summer months.

Changzhou has previously gone under a number of different names: Yanling, Lanling and Jinling. It changed to Changzhou during the Sui Dynasty of AD 581-618. The name means “normal prefecture”.

Close to the hockey stadium are the remains of a walled city, the Ruins of Yancheng, an early settlement that was founded more than 3,000 years ago.

Over time, Changzhou has developed a role as an important trade centre. The building of the Grand Canal in AD 609 meant the city became a canal port and a transport hub for grain, rice, fish, tea, silk and bamboo. It has maintained this role ever since. Today, it is also an important centre for textiles, as well as industry and hi-tech.

Things to see and do

Changzhou is home to the China Dinosaur Park, a top-rated park with more than 50 fossils and an amazing collection of prehistoric bones from across China. There are also a number of rides in the amusement park, including the Brontosaurus Roller Coaster and the Whirling Dinosaur Carriage.

For a sense of tranquility, it is worth paying a visit to the Tianning Temple—one of the largest Zen Buddhist temple and monasteries in China. The city authorities recently rebuilt the Tianning pagoda in the temple grounds, which is adjacent to Hongmei Park. Standing at 153.79 m, the Tianning Baota pagoda is the tallest in China. It was first built during the Tang Dynasty (AD 618 - 907). Since that time it has been destroyed and rebuilt five times.

Changzhou is famous for its handpainted combs. These have been made in the area for more than 2,000 years and are made from materials such as bamboo, wood or animal bones. Making the simplest comb, comprises 28 process (heating, carving, painting, engraving etc), while the most intricate – a Bi – takes 72 different processes. While the combs can be purchased across the city, Fine Comb Lane is an area that has been specially designed as the centre of the comb-making industry.

Dongpo Park is a large park covering more than two and a half thousand hectares. The parkland is a mix of cultural sites and natural landscape.

The Wanglibao Hockey Champions Trophy starts on 17 November. To help spectators plan their trip, a full schedule of hockey action is available here.