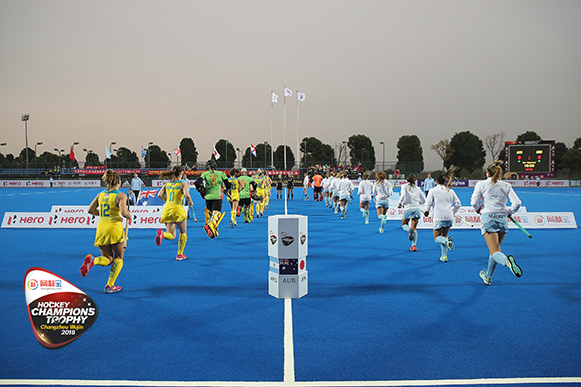 With two rounds of the competition completed and a further three round robin games before the grand finals, levels of excitement around the 23rd edition of the women's Hockey Champions Trophy is rising.

For most of the players competing at the Wanglibao Hockey Champions Trophy, the competition has  an extra edge to it this year. There is, of course, the excitement of playing for the prestigious and iconic trophy – one glance at the very short list of nations that have won the trophy over its 22 previous editions is evidence enough that this event really is the best of the best – but something else is also on the players' radar.

For five of the six teams – Japan being the exception – next year sees the start of the FIH Pro League – a new, fascinating era for international hockey. It is a development that is a hot topic among the hockey players, coaches and fans gathered in Changzhou.

"None of our team has ever played in China before," says Hollie Pearne-Webb, captain of Great Britain, "So this event is great as it gives us a chance to get to know what to expect when we come here for the FIH Pro League next year in February."

Of all the teams at the Hockey Champions Trophy, Great Britain is the team with the most changes to its team – borne of the fact that the previous two year cycle has involved World Cup preparations, where the teams of the United Kingdom compete as England, Scotland and Wales. Those three entities now come together as Great Britain as they build towards Tokyo 2020.

"This is our first major event as Great Britain since 2016," says Pearne-Webb. "So it provides a great base for our team to build game on game. We have had a frustrating start to the tournament [one draw against China and a loss to Australia], but things are moving in the right direction. We will have quick progression because we have a bright team and it is good to have this time to get ready for the challenges of next year."

"I was in China for Beijing," says Dutch captain Eva de Goede, "But for most of the team, this is a first. We have new young players in our squad so it is a little bit of a new start for us. For the Pro League it will be very interesting to play in all the different countries and experience the different cultures. Here, for example, is so very different to playing in Europe, so it is good we get to experience this now."

"When I was a kid growing up playing hockey, I never thought I would be travelling the world as a professional athlete," says Great Britain's Sarah Robertson. "It's a dream come true, and it will be fabulous to see people packing out Lee Valley [where Great Britain will play its initial FIH Pro League matches] next year on a regular basis."

The prospect of teams travelling regularly to Australia for FIH Pro League matches is one of the major benefits of the new competition for Hockeyroo's captain Emily Smith: "It is really exciting that teams will be travelling all the way to Australia to play. Our family, friends and hockey fans will all come out and support us for all our home games. Hockey is just one of those sports in Australia that people back."

"It has also been great to come to China because none of us have played here before and there have been challenges, so to get the chance to play the Champions Trophy here but also to know what to expect when we come to play China in Changzhou next year is a good opportunity to prepare well."

Brooke Peris is another member of the Australia side who is looking forward to the challenges of the FIH Pro League. "We went away from the women's World Cup and learnt what we needed to do to step up another level, and it is the same here. We will take our experiences here, learn from them and just go for it next year. The key is to enjoy the hockey."

And China's Cui Quixia added: "It is such an honour for us to host the best teams in the world here in China. We are usually travelling so we hope that the Hockey Champions Trophy has shown people what can be expected when they come to play the FIH Pro League here."