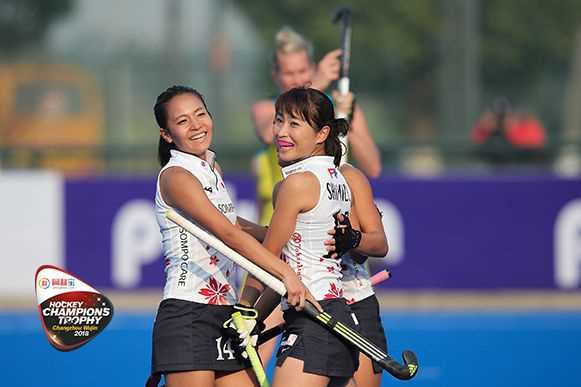 Australia in final despite loss to Japan. China hope to delight home fans with medal

The final day's play at the Wanglibao Hockey Champions Trophy Changzhou Wujin will see some intriguing match ups. Great Britain, the number two ranked team in the world will be looking for their first win when they play the lowest-ranked team Japan (FIH Hero World Rankings:14) in the 5/6th place play-off.

The 2016 Champions Trophy winners, Argentina, will face the host nation China in a tough encounter for bronze, while the Netherlands and Australia will play a re-match of the semi-final of the women's World Cup when they contest the gold medal.

It was one of the surprise results of the tournament but for the coaching staff of Japan, it was simply a case of a team learning from previous matches.

"To turn the results around we need to learn to deal with the opposition's penalty corners and to have the confidence to attack fast along the base line," was the verdict of goalkeeper Megumi Kageyama before this match against Australia. Her team heeded those wise words to take their first win of the competition.

The first goal was the result of a good passing move from the midfield to the forwards. Natsuha Matsumoto picked up the ball and evaded the Australian tackles that flew her way. She found Kanon Mori, who was able to slip the ball past Rachael Lynch in the Hockeyroos' goal.

The second goal was all that Kageyama had spoken about. Australia won a penalty corner but the Cherry Blossoms were like lightning off the line as they broke down the play. A quick pass found Yakuri Mano free at the top of the Australian circle. Lynch saved the first attempt but Mori picked up the rebound, drove the ball along the baseline and found Mano, who pushed it home.

Australia scored a consolation goal through a penalty corner from Penny Squib but, as Emily Smith said after the game, the nerves had got to her side and they and failed to perform anywhere near their best.

"We have to learn how to cope with pressure," said the captain, adding, "This is a young side but we have to do what the Dutch do and play well when we are under pressure. We were playing well at the start of this event and we have got to get that flow back."

Anthony Farry was delighted with the way his team had approached the match and picked up on points from the previous matches.

"We were under pressure from Australia at times but we coped well and scored goals. These players are smart and are learning with each game."

China needed either a draw or a win to progress to the final but to be the first team to take points from the Dutch at this event was always going to be a tall ask, even for a team that is playing some of its best hockey at the moment.

The Netherlands went into the lead through a shot that was flicked high into the China goal by Maxime Kerstholt. That was the sum total of goals in the first half, although the Netherlands came close to threatening Ye Jiao's goal on a number of occasions.

"China are always tough opponents," said Pien Sanders, speaking after the game, and so it proved as the world number one team strove, unsuccessfully, to get a second goal.

The Chinese defence was finally broken by a piece of tactical genius from Head Coach Alyson Annan.

"Alyson told us that if China looked to take their goalkeeper off, we would do so too," said Sanders.

The result was 11 field players apiece and, following their coach's script, Netherlands were the faster team to take advantage of no goalkeeper. The goalscorer was Marijn Veen, scoring her fifth goal of the tournament and extending her lead in the top goal scoring stakes.

There was a consolation for China when Gu Bingfeng scored a penalty corner in the final seconds of the game.

Argentina took on their higher ranked rivals in the match that Las Leonas needed to win in order to keep their bronze medal hopes alive.

They hit their stride quickly and Victoria Sauze was able to put her side ahead from a penalty corner within five minutes of the match starting.

Great Britain made their own chances, including three consecutive penalty corner attempts. Today however, they found Belen Succi in good form and the tall 'keeper was quick to react to the shots that were heading into the bottom corner of the goal.

The first half remained at 1-0, although Maria Granatto was unlucky to see a fierce shot fly over the crossbar and Sabbie Heesh in the Great Britain goal did well to keep an Argentina penalty corner out in the last minute of the half.

The second half saw Great Britain working hard to get back on terms. Hannah Martin and Anna Toman were relentlessly attacking down the right and the defnece were high up the pitch but there was no way through a tight Argentine defence.

"We have worked hard on our structures and the future is exciting," said Sarah Evans after the game, "but it is disappointing not to see these things pay off here. We will be going all out to make sure we finish with a win [against Japan], but more importantly that we put in a performance that we are all proud of."

"It was so important for us to win this game and make sure we play in the bronze medal match," said Rocio Sanchez after the game.

"We didn't start the competition well but we have a lot of young players so they needed a little time to grow into the team. Now, for our self-confidence, it is important that we win in the bronze medal match."