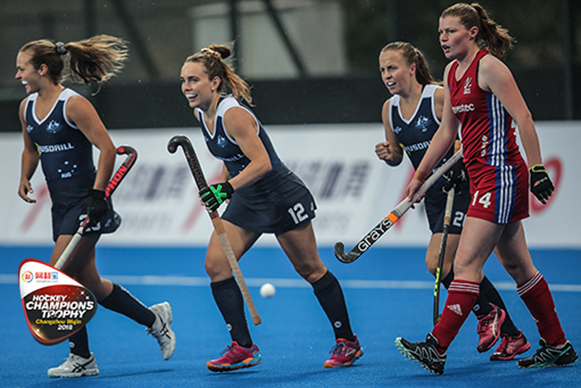 The Hockeyroos are leading the way at the Wanglibao Hockey Champions Trophy Changzhou Wujin after they recorded a second win at the prestigious end of year event. The Netherlands joined Australia on six points later in the day as Caia van Maasakker scored twice in her team's 3-0 win over Argentina.

The results, as the teams head into a rest day, see Australia and the Netherlands sitting at the top of the table with six points apiece. China have drawn twice, so have two points, with Great Britain and Japan on one point and Argentina on zero points after two defeats.

Australia continued their great form at the Wanglibao Hockey Champions Trophy as they beat the world number two side Great Britain in an entertaining and hard-fought match.

The result leaves Australia with six points from two matches and sets-up an intriguing encounter with the Netherlands when the competition resumes after Monday's rest day.

The first half was a well-matched contest in the middle of the field. Both sides were playing quick, passing hockey that created space and opportunities to attack. The difference lay in the finishing.

Where Great Britain were unable to find a way past a quite impressive Australia defence, the Australia attack was able to unpick holes in their opponent's circle and both first half goals were the result of sharp passing and inventive movement around the circle.

First to score for the Hockeyroos was Brooke Peris, who was able to latch onto a fizzing pass from the right-hand side of the field: with a full-length stretch she was able to steer the ball into the goal.

The second goal was a real team effort, which saw the ball played up the pitch in a quick series of passes before Kalindi Commerford controlled the ball in the centre of the circle and squeezed it past Amy Tennant, the Great Britain goalkeeper.

Great Britain continued to play their own inventive game. Sarah Jones was busy in midfield, often magicking herself out of a sea of Australian players, while Giselle Ansley was enjoying a good game in defence, emerging with the ball time and again and distributing with vision.

There were no further goals in the match but Great Britain were left rueing two missed opportunities towards the final minutes of the game as a quick interception by Sophie Bray led to a cross from Suzy Petty that pinged tantalisingly across the face of the Australian goal – no Great Britain stick was able to connect.

Seconds later, Hannah Martin saw a strong shot well-saved by Ashlee Wells, who just managed to get the outside of her goalkeeper pad to the ball.

"We wanted to go out with a lot of energy," said goalscorer Peris, speaking after the game. "At times we played as we wanted to, there were times when we didn't, but I am proud of the way we are performing overall.

"I think we have talked about our culture a lot and now is time to show that with actions. We did that and that is why we came away with the win today. We learnt a lot from the World Cup and in our next game [against the Netherlands], we are going to really go for it."

Great Britain have not enjoyed the start to the competition they would have hoped for, but the players are focusing on the long term, as Sarah Robertson explained: "We would obviously have hoped to have got better results in our opening two games but we have to remember where we are on our programme. We have Pro League next year and Tokyo the year after – we have to keep our eye on the bigger picture."

And teammate and fellow Scotland international Amy Costello added that the Great Britain team was gelling well and the future was looking exciting for the squad, despite today's result. "We did a lot of things very well and we will learn from thebthings that didn't go to plan," she said.

The two Asian rivals, Japan and China, played out a busy but ultimately goalless game in the second match of day two in Changzhou. China were marginally the better side as they created the greater amount of chances but in Japan's goalkeeper, Megumi Kageyama they found an immovable object as the agile 'keeper made some crucial saves.

That said, one of the best saves came from China as Kanon Mori unleashed a shot that beat China's goalkeeper Ye Jiao but was saved on the line by Gu Bingfeng.

"For our next game, against Argentina, we must start with more confidence, put our shots away and keep our focus," was the verdict of China's Cui Qiuxia.

"We created a lot of chances, particularly penalty corners but we didn't score. And we started slowly, that too must improve."

Head Coach to Japan, Anthony Farry was frustrated by his team's performance.

"We lost yesterday [3-1 against the Netherlands], but we played much better in that game. Of course, to get a point is okay but we didn't play anywhere near as well today and that is disappointing."

When Caia van Maasakker scored the goal that broke the deadlock against Argentina, she also put her team ahead very much against the run of play.

The defender and penalty corner specialist, who scored a second thunderous penalty corner in the final quarter, said: "We didn't start well but we worked very hard to compensate for that.

"That is the thing about the team, when we are not playing well, we still have the self-confidence that we can change things. This is a team that is growing and learning in every match."

The match was a bitter disappointment for Argentina, who needed to win if they are to be in with a realistic chance of defending their title.

It was also the day Martina Cavallero celebrated 200 caps for her country, and the midfielder would have loved to have enjoyed a victorious milestone.

The Argentina side started very brightly and threatened to breach the Dutch defence throughout most of the first half. Julieta Jankunas had a storming shot well saved by Anne Veenendaal and Maria Ortiz was unlucky not to score from a penalty corner.

These were just two of the many attempts that Las Leonas had to take the lead, but either good defence or poor finishing meant the wave of attacks amounted to nothing.

Maasakker's two strikes sandwiched an equally fine penalty corner from Yibbi Jansen, who placed her shot beautifully in the corner of the goal past the outstretched leg of Belen Succi.

Today's results leave Netherlands and Australia on six points; China on two; Great Britain and Japan on one apiece and Argentina still to register a win.