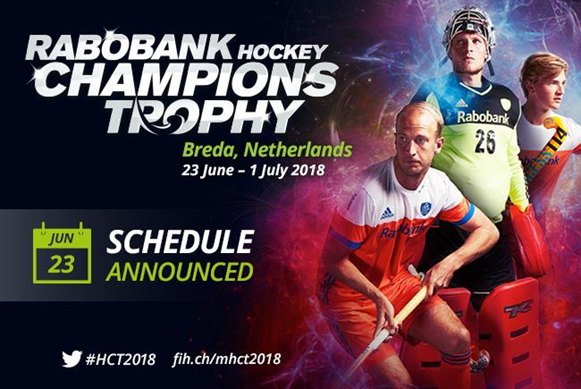 The International Hockey Federation (FIH) has revealed the Men’s Hockey Champions Trophy 2018 will be held at BH & BC (De Bredase Hockey and Bandy Club) in Breda, Netherlands between 23 June and 1 July.

In line with the event qualification criteria, hosts Netherlands, Olympic Champions - Argentina plus World Cup, World League and Champions Trophy winners Australia qualified for this event automatically whilst the latter three nations were invited by the FIH Executive Board.

Dutch bank Rabobank has been confirmed as the title sponsor for the event, continuing their longstanding and hugely successful association with the sport both in the Netherlands and on the international stage. As a result, the official event name is the ‘Men’s Rabobank Hockey Champions Trophy Breda 2018’.

The competition in Breda is notable for many reasons, not least for the fact that it will be the last ever men’s edition of an event with an illustrious history. This heritage is reflected in the opening match, which features one of the biggest rivalries in the sport.

Pakistan, the country that launched the Hockey Champions Trophy back in 1978, take on arch-rivals India at 14:00 on Saturday 23 June (all times local – CEST). It is a fixture that is sure to draw thousands of spectators to the venue as well as millions of fans tuning in from across the world, eagerly anticipating the latest episode of this long-running battle between two of the sport’s most successful nations.

That match is followed at 16:00 by another eye-catching fixture, with home favourites and European champions Netherlands taking on Olympic and Pan American champions Argentina.

A sensational opening day of action is rounded off by the meeting between Australia and Belgium, who meet at 18:00 in what is certain to be a hugely competitive fixture between two of the best attacking sides in the world.

Other schedule highlights include a showdown between European neighbours Netherlands and Belgium at 14:00 on Sunday 24 June, whilst a rerun of the Rio 2016 Olympic Games final between Argentina and Belgium on Tuesday 26 June at 18:00 is definitely a match not to be missed.

Argentina will be looking to reverse their loss to Australia in December’s Men’s Odisha Hockey World League Final on the last day of the round-robin at 14:00 on Saturday 30 June, with the champions of Europe and Asia, Netherlands and India, concluding this stage of the competition at 16:00.

Over nine days of action, which includes a rest day on Monday 25 June, all teams will be focused on reaching the final, which will be played at 16:00 on Sunday 1 July, with the other classification matches being played earlier in the day.

This will be one of the last opportunities for these teams to play against one another competitively before the end of year Odisha Hockey Men’s World Cup Bhubaneswar 2018 (28 November – 16 December).

It was also confirmed that an important warm-up event for the Vitality Hockey Women’s World Cup London 2018 will take place alongside this competition. The ‘Rabobank 4-Nations Trophy Women’ will be held in the same venue, with reigning World Cup and World League champions Netherlands taking on China, Japan and Spain between 26-30 June. You can view the full schedule for that event here.

Note: If teams qualify under more than once under criteria 1 – 5, the additional teams will be invited by the FIH Executive Board.