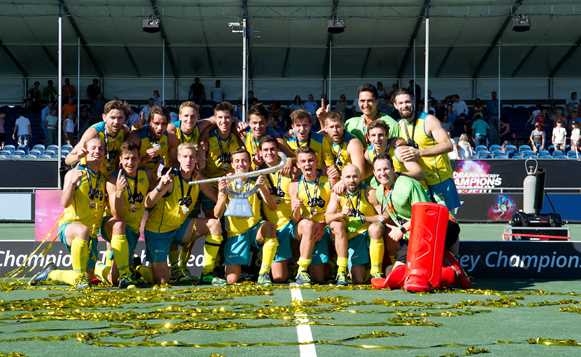 Australia are the winners of the Men's Rabobank Hockey Champions Trophy 2018 thanks to a shoot-out victory against an India team that pushed them all the way in Sunday's showpiece final in Breda.

India (FIH Hero World Ranking: 6) were very much on top in the opening quarter but could not find a route to goal thanks to some excellent defensive work by Australia (WR:1), who showed all of the composure that you would expect from the top ranked team in the world. The Kookaburras grew into the game and took the lead through a second quarter penalty corner drag-flick from Blake Govers, with India goalkeeper PR Sreejesh managing to get a glove on the shot but not enough to stop the ball from travelling into the goal.

India scored their equaliser in the third quarter when Vivek Prasad crashed a superb volley past Australia shot-stopper Tyler Lovell, a man who played a significant role in the shoot-out when the scores fnished locked together at 1-1.

Lovell kept Sardar Singh, Harmanpreet Singh and Lalit Upadhyay off the score-sheet in the shoot-out, with Aran Zalewski, Daniel Beale and Jeremy Edwards scoring the crucial goals as the Kookaburras triumphed 3-1.

The gold medal game brought an end to a wonderful Champions Trophy event in Breda, with Australia claiming their 15th title in a rematch of the 2016 final, which took place in London, England. That match also finished with an Australia winning in a shoot-out, although great credit must be given to silver medallists India who played superbly throughout this competition.

European champions the Netherlands (WR:4) claimed the bronze medal thanks to a 2-0 victory over Rio 2016 Olympic gold medalists Argentina (WR:2). The match was evenly contested throughout, with both teams outstanding in defence to keep each other off the score-board until the fourth quarter. The deadlock was finally broken when a perfectly executed penalty corner drag-flick from Jeroen Hertzberger ratted the backboard in the 47th minute. The scoring was completed by Mirco Pruijser, who produced an outstanding finish to flick into the roof of the Argentina net following a blocked penalty corner effort. It proved to be an excellent ending to the campaign of the host nation, and was certainly enjoyed by the thousands of fans watching in the stadium.

“It was an amazing game and the crowd were also amazing”, said Netherlands star Glenn Schuurman, who became a Champions Trophy bronze medal winner on the occasion of his 100th senior international match. “Argentina are a really good team. They are the Olympic champions, they won against Australia yesterday and it was really close today."

The 5-6 classification match between Belgium (WR:3) and Pakistan (WR:13) was won by the Red Lions, who overcame their stubborn opponents in a shoot-out. Pakistan opened the scoring through Ali Shan before goals either side of half time from Tom Boon and Florent van Aubel gave the Rio 2016 Olympic silver medallists a 2-1 advantage. It was a lead that they held until the dying seconds, with Pakistan’s Toosiq Arshad firing between the legs of goalkeeper Loic van Doren to level the scores at 2-2 and take the match into a shoot-out. However, Van Doren - younger brother of reigning FIH Hockey Stars Player of the Year Arthur van Doren - made a string of crucial blocks to give Belgium a 2-1 shoot-out success.

All official competition information can be found on FIH.CH, with extended coverage available the FIH social media channels.