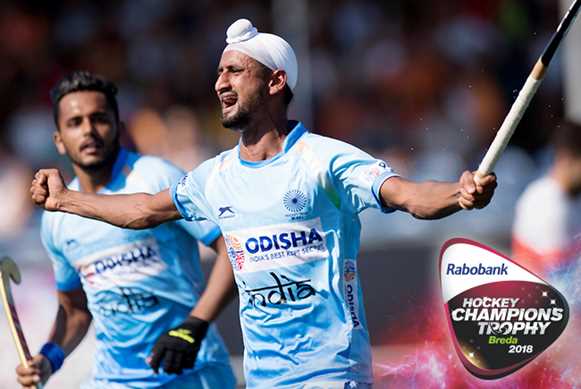 India claimed a crucial draw against the Netherlands to reach the competition final in Breda. Copyright: FIH / World Sport Pics

The title match of the Men’s Rabobank Hockey Champions Trophy 2018 will be a replay of the 2016 final as India booked their place in Sunday’s gold medal match, securing an all-important draw against host nation the Netherlands in front of a capacity crowd in Breda.

India came into the contest knowing that a point against the home favourites would be good enough to see them into the final, and produced a fine defensive display to keep alive their hopes of winning a first ever Champions Trophy title.

The showpiece final takes place on Sunday, with Australia looking to win the Champions Trophy for the 15th time. The day will also feature a bronze medal meeting between Netherlands and Argentina as well as a Belgium and Pakistan contesting the 5-6 classification match.

The opening match of the day was a clash between the reigning world champions and the Olympic gold medallists of Rio 2016, as Australia (FIH Hero World Ranking: 1) took on Argentina (WR:2) in a pulsating contest.

Argentina were much improved from their surprise 4-1 defeat at the hands of Pakistan on Thursday, proving to be more than a match for the reigning Champions Trophy title holders and 2018 finalists in the first two quarters. As he so often does, penalty corner king Gonzalo Peillat played a starring role in the first half, scoring two stunning low efforts either side of a striker’s finish from 19-year-old Kookaburra Tim Brand as Los Leones took a 2-1 lead into the half time break.

That score-line remained the same until six minutes from the end of the contest, when Peillat completed his hat-trick with another accurate penalty corner effort to give Argentina some breathing space at 3-1. Australia hit back almost immediately when Brand scored his second of the game with a wonderful backhand effort that flew into the roof of the goal, but Argentina held on for a victory that secured a place in Sunday’s bronze medal match and forced Belgium into the 5-6 classification match against Pakistan.

“It was a really tough match but we did it for us”, said Peillat, who has now scored six times in Breda and leads the race to finish as top scorer. “We really haven’t played a good tournament and this was our best performance so far. It was really good for the team to get some confidence.”

A capacity crowd were given a cracking show by home favourites the Netherlands (WR:4) and India (WR:6), with both sides showing full commitment in the race to secure a place in Sunday’s title match. The European champions went closest to opening the scoring when a brilliant turn and backhand strike from Robbert Kemperman forced a fine save from India goalkeeper PR Sreejesh, while India’s counter-attacking threat certainly kept the Dutch defenders busy.

The Netherlands dominated the third quarter but could not find a breakthrough, as India showed excellent organisation in defence to keep the Dutch off the score-sheet. Despite the home favourites looking most likely, it was the Indians who broke the deadlock two minutes into the final quarter when Mandeep Singh pounced on a saved penalty corner to finish in emphatic style, silencing the home crowd. The Dutch fans were soon cheering again thanks to Thierry Brinkman, who squeezed in an equaliser from a tight angle with five minutes remaining.

The Netherlands piled on the pressure in the remaining minutes but, despite having a strike ruled out by the video umpire, could not find the goal that they needed to deny the Indians a place in the gold medal game.

The Men’s Rabobank Hockey Champions Trophy 2018 concludes on Sunday 1st July, with the 5-6 classification match between Belgium and Pakistan getting things started at 11:30 Central European Standard Time (UTC +1). Netherlands and Argentina will contest the bronze medal match at 13:45, with the gold medal game between Australia and India scheduled to start at 16:00.

A full schedule as well as broadcasting and official competition information can be found on FIH.CH, with extended coverage coming via the FIH social media channels.

A limited number of spectator tickets are still currently available for a final day that is expected to be a sell-out. For more information, please click here.