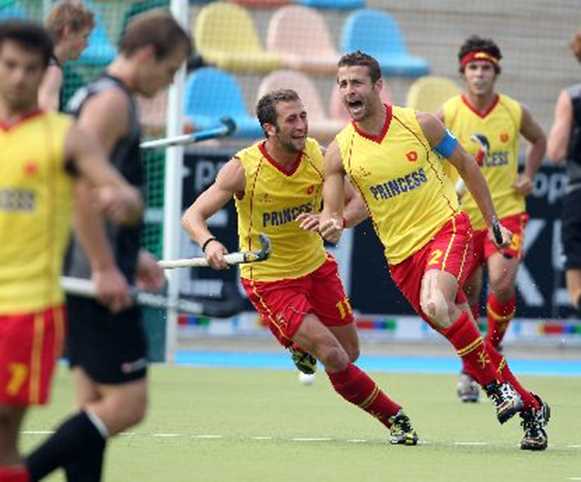 There are very few players in the world that command as much respect as Spain striker Santi Freixa. A genius on the field and a gentleman off it, Santi began his senior international playing career in 2000 as a fresh faced and hugely gifted 17-year-old.

Four years later, he was firmly established as one of the finest attackers in the game, and following brilliant displays at the Athens Olympics and the Champions Trophy in Lahore – where he helped Spain win the title – he was named FIH Young Player of the Year.

Santi’s awards cabinet has been steadily growing ever since, with European Championship Gold (Leipzig, 2005) and an Olympic Silver (Beijing 2008) Medals being amongst the many highlights.  In recent seasons, the former Amsterdam H&BC forward has had more than his fair share of injuries, but over the last 12 months has returned to full fitness and is now ready to produce his brilliant best in Auckland.

With the start of the Owen G Glenn FIH Champions Trophy just days away, we caught up with the Spanish team captain tells us about how his team are focused on finding form ahead of their crucial Olympic Qualifying campaign in 2012.

FIH.CH: Hi Santi, many thanks for talking to us! How are you feeling ahead of the Owen G Glenn FIH Champions Trophy? Excited?
SANTI FREIXA: “Of course! We are really excited about being in New Zealand and playing in the Champions Trophy. We want to have fun while playing top hockey and I think the Champions Trophy is the best tournament to do so.”

FIH.CH: What is the mood like in the Spain camp ahead of the tournament? Have the injuries to Pol Amat and Xavi Lleonart affected the team, or is everyone still confident of performing well?
SF: “We are eager to play a tournament after the poor performance in the EuroHockey Nations Championships in Mönchengladbach. This is a great scenario for us to change the negative image that we showed the last matches against France and Ireland. We will definitely miss Pol and Xavi – they are such a great players – but we arrived here with a strong squad and we want to be ambitious in our thinking, improving elements of our game and, of course, trying to get results.

FIH.CH: Spain have been drawn into Pool B where you will face Pakistan, Great Britain and world champions Australia. What are your thoughts about facing these very tough opponents?
SF: “Great! We are facing a super important year with our minds focussed on the Olympics Games. We want to play always against the best teams, this is the way to improve and reach your potential.”

FIH.CH: As well as being a wonderful competitor, away from the field you are regarded as one of the nicest people in the sport. It must make you incredibly proud to wear the captain's armband for your country.
SF: “I’m very proud to represent my country and to be a member of an amazing group of people. Being captain is an extra effort that you do for the group, but from my point of view it is actually a pleasure.”

FIH.CH: You have been hit by a number of injuries in recent years, but you seem to be very much back to your best. How are you feeling about playing hockey and life in general at the moment?
SF: “Injuries? It is not in my dictionary anymore! I enjoy every single moment of the training and games. This is my motto and I try to apply it every day.”

FIH.CH It was recently announced that Spain will head to Japan next year to compete in the Olympic Qualifying tournament for London 2012. Good performances in New Zealand will be the perfect way to boost confidence ahead of that crucial competition, yes?
SF: “The Olympic Qualifying tournament is our main objective. We need to get the ticket for the Olympics at the tournament in Japan, which will be really difficult. We have respect for all of our opponents; the ranking of the team in tournaments such as this means nothing. Indeed, playing a solid tournament in New Zealand will build more confidence for our Olympic preparations.

FIH.CH: Finally, you recently returned to your home club Atlétic Terrassa after a number of years in The Netherlands with Amsterdam H&BC. How much did you enjoy your time in The Netherlands, and is it great to be home?
SF: “The Last four years in Amsterdam had a big impact on my life. I will always be thankful to Amsterdam H&BC for this amazing opportunity. Nowadays, I’m back in Spain and to be home is great. The Atlétic Terrassa team is full of my friends … it is great to enjoy the atmosphere in this fantastic club.”

The Owen G Glenn FIH Champions Trophy takes place from 3-11 December at North Harbour Hockey Stadium in Albany, Auckland.  Eight of the best teams in the world will compete – with 24 games being played over the six days of the competition. The FIH will be bringing you all the news and results from the tournament via our Event website - http://www.fih.ch/en/competitions-147-owen-g-glenn-fih-champions-trophy-champions . Live streaming will also be available via www.livefih.tv *. For information about purchasing tickets for the event, please visit www.championstrophy.co.nz

* Due to licensing and contractual restrictions, access to LIVEFIH.TV may be limited in some territories Back