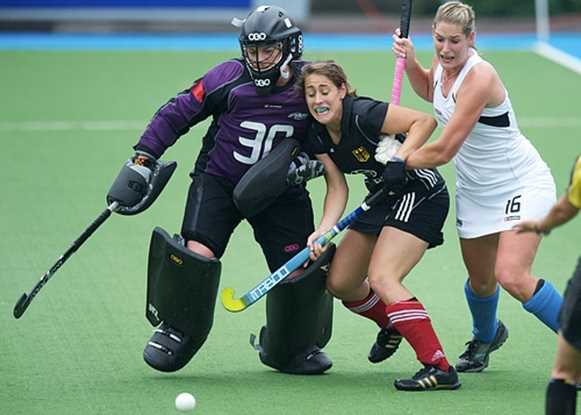 Germany were given a very tough ride by the Black Sticks in the opening match of the Rabo FIH Champions Trophy but emerged as winners thanks to a solitary first half penalty corner strike from Julia Müller.  New Zealand dominated long periods of the first half, but Müller’s clinical shot proved to be too good for outstanding goalkeeper Bianca Russell. Although lucky to go into half time with the advantage, Germany were excellent in the second half and showed that they will be a tough team to beat here at Amstelveen’s Wagener Stadium in The Netherlands.

Despite their lesser world ranking, New Zealand were by far the better team in the first half, dominating possession and rarely letting Germany out of their own half. The Black Sticks has some decent chances, with Clarissa Eshuis’s penalty corner flick forcing a decent save from Germany keeper Barbara Vogel.

When Vogel was eventually beaten she was rescued by her defensive team mates, with Julia Karwatzky and Christina Schütze both making excellent blocks on the line within seconds of each other to deny New Zealand. It was a seriously impressive start for the Black Sticks, who applied relentless pressure of the Germany defence.

However, possession and chances are nothing without goals, and Germany showed their ruthlessness when they scored with their only clear-cut goal-scoring opportunity of the first half. New Zealand conceded a penalty corner in the 28th minute which, fittingly, was drilled home by Germany number 28 Julia Müller.

New Zealand were unlucky to go into half team trailing, but faced a vastly improved Germany team in the second half and were thankful to goalkeeper Bianca Russell who kept them in the game with a string of top class saves. Russell came to her side’s rescue making saves from Natascha Keller as well as a double block from a penalty corner situation.

The Black Sticks rallied towards the end of the game and eventually won a penalty corner with three minutes remaining. However, Germany blocked out the danger and claimed all three points in their Champions Trophy opener.

> Germany are now unbeaten in 10 successive matches against New Zealand in Champions Trophy, World Cup and Olympic competition. They have won the last five.
> Julia Müller scored the winning goal for Germany in the 28th minute by converting a penalty corner. It was her 3rd Champions Trophy goal in 25 CT matches.
> New Zealand failed to score from 12 goal attempts, 9 of which were on target.
> New Zealand failed to convert any of their 3 penalty corners awarded.
> Germany converted 1 of 4 penalty corners awarded.
> Germany scored once from 11 goal attempts, 8 of which were on target.