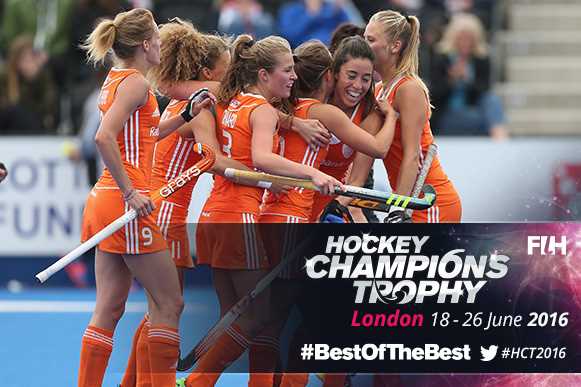 The Netherlands were the only team to record a victory on the opening day of the Women’s Hockey Champions Trophy 2016, with team captain Maartje Paumen proving herself to be the star of the show with four goals as her team claimed a 6-2 win over New Zealand at the Lee Valley Hockey Hockey & Tennis Centre in London.

The United States began their campaign with a 2-2 draw with Australia’s Hockeyroos, while a double from Helen Richardson-Walsh helped home favourites Great Britain secure a 2-2 tie with Argentina’s Las Leonas in front of a passionate, vocal crowd.

More information about Saturday’s matches can be found below.

Day two of the Women’s Hockey Champions Trophy 2016 takes place on Sunday (19 June) with Pan American rivals USA and Argentina meeting at 1200 (UTC/GMT +1), the Netherlands taking on Great Britain at 1400 and Oceania giants Australia and New Zealand getting underway at 1600.

Australia (FIH Hero World Ranking: 3) and USA (WR: 7) played out an entertaining 2-2 draw in the opening match of the Women’s Hockey Champions Trophy 2016 in London.

The Hockeyroos scored the first goal of the competition two minutes before the end of the first quarter in an evenly contested game, with Kathryn Slattery firing through the legs of USA keeper Jackie Briggs before Jill Witmer levelled with a brilliant volley after her initial effort hit the crossbar of the Australian goal. The Oceania champions moved ahead again three minutes after half time when Grace Stewart netted, but Caitlin van Sickle sealed a point for the Pan American champions with a fourth quarter strike.

“I was really pleased with the performance”, said Hockeyroos Head Coach Adam Commens after the match. “We played a couple of practice matches in the lead up and they were very inconsistent in the way that we played, there were patches of good stuff there, but I thought today was a much more consistent and comprehensive performance. We created a lot of chances.”

USA captain Lauren Crandall said: “I’m always happy to take one point, although you always want three but we’ll take one away from it and there are some good lessons moving forward. I think we came out a little slower than we wanted, but the important thing is that we built on every quarter and we showed a lot of resilience out there, which is something that we really pride ourselves on.”

The home favourites were cheered on by an enthusiastic crowd that enjoyed every minute of the action at the Valley Hockey and Tennis Centre, and their support was rewarded with a solid display as GB battled to a deserved draw against Las Leonas.

Argentina were the first team to make a mark on the scoreboard when Maria Granatto put her side ahead in the seventh minutes to quieten the home supporters, but they were soon back in full voice when Helen Richardson-Walsh netted her first. A brilliant penalty corner drag-flick from Carla Rebecchi found the top right corner to put Argentina back in front early in the fourth quarter, with Helen Richardson-Walsh completing the scoring six minutes from time by finishing off a fine pass from Sam Quek.

“Helen is a magician in the circle - I hate marking her in training, so I wouldn't like to do it in an international match”, said Great Britain captain Kate Richardson-Walsh after the game. “She's always in the right place at the right time, and she's got an eye for the goal, so whether she's playing in midfield or in the forward line as she was today, she's lethal.”

Maartje Paumen extended her record as the all-time top scorer in Champions Trophy history with four goals as the Netherlands powered to a 6-2 victory over New Zealand’s Black Sticks to complete the action on day one.

Paumen netted penalty corners in the 11th, 24th, 49th and 58th minutes to give Oranje all three points and take her Champions Trophy goals tally to 32. It was also a good day for Kelly Jonker, who scored twice in the contest. Despite the scoreline, New Zealand were excellent at times, particularly either side of half time when goals from Charlotte Harrison and Stacey Michelsen cancelled out Paumen’s first two efforts to lock the score a 2-2 and had another effort ruled out by the video umpire.

“6-2 against New Zealand is a pretty good start to the tournament, so I am really happy”, said Netherlands captain Paumen. “New Zealand are really good, strong, fast players. They are a really good opponents and we had to bring out our best today to win this game.”

Double goal-scorer Kelly Jonker said: “It was amazing, I think we did really well in the first half although the third quarter was not so good but we picked it up. It is really good to score six goals in the first match so I think we can be really proud of ourselves.”

Tickets for the Women’s Hockey Champions Trophy 2016 are still available and can be purchased by clicking here.