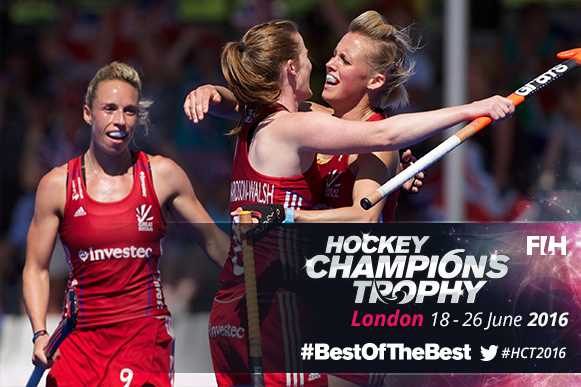 GB will be looking for the home fans to inspire them to victory in London Photo: FIH/Stanislas Brochier

The recent return to winning ways followed a rough period for the England and GB team. They suffered a significant drop down the FIH Hero World Rankings as a result of England’s dismal 11th place finish at the Rabobank Hockey World Cup 2014, despite entering the competition ranked third.

Shortly after the end of that event, England Head Coach Jason Lee made the decision to step away from the squad and was replaced on an interim basis by Danny Kerry, the team’s former Head Coach who also held the role of Performance Director for England and Great Britain Hockey.Kerry’s impact was immediate, guiding the England team to a silver medal at the Commonwealth Games in Glasgow, Scotland before achieving a fifth place finish at the Argentina Hockey Champions Trophy at the end of the year.

Soon after, Kerry was named Head Coach for the England and GB Women’s Hockey programme through to the Rio 2016 Olympic Games and, following England’s European title success, was named High Performance Coach of the Year at the UK Coaching Awards at the end of 2015. England Hockey recently announced that Kerry had been appointed Head Coach of the England and GB women’s teams on a permanent basis through to the Tokyo Olympic Games in 2020. As well as the respective talents of ace shot-stopper Hinch and ever-dangerous goal-scorer Alex Danson, a vast array of top class internationals have been named in GB’s provisional squad for the Hockey Champions Trophy.

2015 FIH Young Player of the Year Lily Owsley is one of the hottest young properties in the game thanks to her speed and incredible skills, while veteran stars Kate and Helen Richardson-Walsh bring masses of world level experience to the fold.

Another hugely experienced player named in the provisional squad is powerhouse defender and penalty corner expert Crista Cullen, who stepped away from hockey after winning bronze at the 2012 Olympics but returned to the GB training squad late last year. If selected for the Champions Trophy, Cullen will be hoping to produce her best performances in a bid to secure her place in the squad for Rio 2016.

Player perspective – Susannah Townsend (midfield): “The Champions Trophy will be a tournament where each team will set out to start to build some momentum going into the Olympics. For us, we are at home, with our home crowd and playing at a stadium where we have had a lot of success. Personally I love playing at home in London, having the home support in one of the best cities in the world makes it a pleasure to play in.”

One to watch:  Alex Danson. One of the most feared strikers in the game, Danson is a defender’s nightmare: quick, skillful and absolutely lethal in front of goal. Named on the shortlist for the FIH Player of the Year for 2013.

FACTS
Great Britain
Nickname: Team GB
Current FIH Hero World Ranking: 6
Notable honours: 2x Olympic bronze medallists (1992, 2012), FIH Champions Trophy silver medallists (2012).
Rank in previous CT editions: 2012 – 2nd, 1997 – 5th, 1993 – 6th, 1989 – 4th, 1987 – 5th.
About the team: Following their bronze medal at the London 2012 Olympic Games, Hockey Champions Trophy hosts Great Britain will be aiming even higher at Rio 2016 and certainly have players capable of mixing it with the very best in the world. They were in excellent form at the Valencia Hockey World League Semi-Final 2015, defeating China in the competition final to book their ticket to Rio. The vast majority of that squad went on to represent England at August’s Unibet EuroHockey Championships at London’s Lee Valley Hockey and Tennis Centre, where they took the title thanks to the goalkeeping heroics of Maddie Hinch, whose brilliance in the shoot-out helped her team overcome world number one ranked Netherlands.
GB Hockey website: www.greatbritainhockey.co.uk
Twitter: @EnglandHockey
Facebook: EnglandHockey
Instagram:@gbwomenshockey