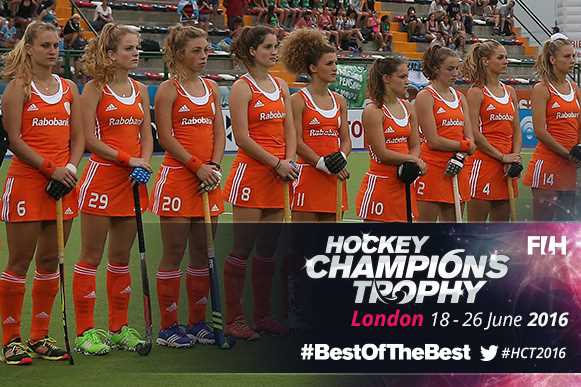 The Netherlands (FIH Hero World Ranking: 1) have long been one of the dominant forces in world hockey, and in recent years have claimed the vast majority of the sport’s biggest prizes. They are the Olympic gold medallists from both the Beijing 2008 and London 2012 Games, and two years ago once again proved themselves as the finest team on the planet by winning the Rabobank Hockey World Cup in front of their home fans in  The Hague.

Since that success, Oranje have claimed a bronze medal at the Argentina Hockey Champions Trophy (December 2014), a first place finish at the FINTRO Hockey World League Semi-Final in Antwerp (July 2015) as well as a silver medal at the Unibet EuroHockey Championships in London (August 2015). Despite ending 2015 with a disappointing fifth place finish at the Argentina Hockey World League Final in Rosario, they remain the world’s top ranked side and will be the team to beat at both the Hockey Champions Trophy and the Rio 2016 Olympic Games, where a third successive gold medal is a very realistic possibility.

The Netherlands have a glittering array of world-class talent at their disposal. The provisional squad named for the Hockey Champions Trophy contains four FIH Players of the Year – Naomi van As (2009), Maartje Paumen (2011 and 2012), Ellen Hoog (2014) and Lidewij Welten (2015), while brilliant shot-stopper Joyce Soembroek, the FIH Goalkeeper of the Year for both 2014 and 2015, is an ever-reliable presence.

Extra info:In October 2015, the Royal Dutch Hockey Association (KNHB) named legendary Australia international Alyson Annan as Head Coach of the Netherlands women. Annan – widely regarded as one of the greatest players of all time and a central figure in the Hockeyroos team that won two Olympic gold medals and two World Cups between 1994 and 2000 – moved into the position vacated by Sjoerd Marijne, who stepped away from the role following the Netherlands’ shoot-out defeat to England in the final of the Unibet EuroHockey Championships in August.

Double FIH Player of the Year Annan has been a long-time resident in the Netherlands and, since ending her playing career in 2003, has held numerous coaching roles. In 2004 she was Assistant Coach to Marc Lammers, who guided the Netherlands women to a silver medal at the Olympic Games in Athens. More recently, Annan has been coaching the Dutch junior women’s team and Amsterdam H&BC men, the latter making her the first female Head Coach in the history of the top Dutch men’s division.

One to watch: Lidewij Welten. The 2015 FIH Player of the Year is an exceptional attacker blessed with speed, skill and an eye for goal. Welten has been a dazzling performer for the Netherlands over the past 18 months and is likely to be a central figure for the side both in London and Rio.