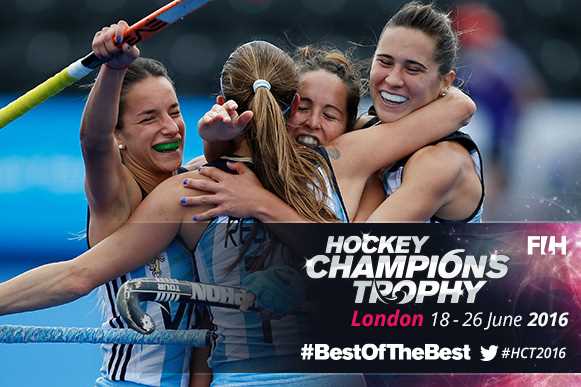 Argentina, the Netherlands and New Zealand were all winners on the third day of action at the Women’s Hockey Champions Trophy 2016, currently being played at the Lee Valley Hockey and Tennis Centre in London, Great Britain.

In the first match of the day, Argentina’s Las Leonas battled to a 2-1 win over Australia’s Hockeyroos to maintain their hopes of defending the title that they won in 2014.

However, it is the Netherlands who remain at the top of the standings thanks to a third successive victory in the competition, overpowering USA 4-1.

Defending champions Argentina took a huge step towards securing a place in the final of the Women’s Hockey Champions Trophy 2016 in London thanks to a 2-1 victory over Australia in the opening match of day three. The result moved Las Leonas onto seven points from three games having started the day locked together on four points with the champions of Oceania.

Argentina’s goals came from two of their most experienced campaigners, with Noel Barrionuevo firing home a third quarter penalty corner before team captain Carla Rebecchi scored a superb solo goal - her fifth of the tournament - to double the advantage seven minutes from time. A brilliant individual goal from Kathryn Slattery reduced the deficit with three minutes remaining, but Las Leonas held on for the win.

“I am very happy with the result”, said Argentina captain Carla Rebecchi after the match. “The system of the Champions Trophy means that every match is important, so to play in the final means that you have to have more points than the others to get there. Today was a very important match because Australia had the same number of points as us.”

The Netherlands made it three wins from three matches at the Women’s Hockey Champions Trophy in London, with 2015 FIH Player of the Year Lidewij Welten scoring twice in a 4-1 victory over USA. The triumph ensured that it was a day of double celebration for Oranje Head Coach Alyson Annan, the legendary Australian international who was also celebrating her 43rd birthday.

The reigning World and Olympic champions continued their excellent form at the Lee Valley Hockey and Tennis Centre with a dominant performance against the Pan American champions, who were missing team captain Lauren Crandall through injury. The Dutch needed just four minutes to open the scoring, with Kitty van Male getting a crucial touch in the circle to guide a cross into the net before Carlien Dirkse van den Heuvel made the score 2-0 before the end of the first quarter. Although Kelsey Kolojejchick pulled a goal back for USA with a 24th minute penalty corner, a double strike from Welten put the result beyond all doubt to move the Dutch onto nine points and remain top of the standings.

"There is still a lot to improve”, said Welten after the match. "It's not about being there already but getting there and making every game much better. In the first game we got a lot of corners and made them but now you see that we are making our field chances as well."

A first minute strike from Stacey Michelsen proved to be enough to give New Zealand a 1-0 win over host nation Great Britain in the final match of day three at the Women’s Hockey Champions Trophy in London. The result gave New Zealand their first points of the competition, but leaves Great Britain with just one point and facing a near impossible task of qualifying for the event final.

The Black Sticks were outstanding in the early stages of the match and thoroughly deserved their lead, with Michelsen taking advantage of some slack defending to brilliantly weave her way through the GB defence before slotting home with a cool finish. Great Britain had numerous chances to level in the latter stages, but found themselves thwarted by some outstanding goalkeeping from Sally Rutherford to guide her team to victory.

“I think it was good for us to make a good start to today’s game, and we certainly came out with a lot more energy than we had in the two previous matches”, said winning goalscorer Stacey Michelsen after the match. “We almost surprised ourselves with how well we started because we struggled a little bit in the first two games, to be honest. Having a good start was so positive, although we gave them far too many opportunities, particularly in the last quarter.”