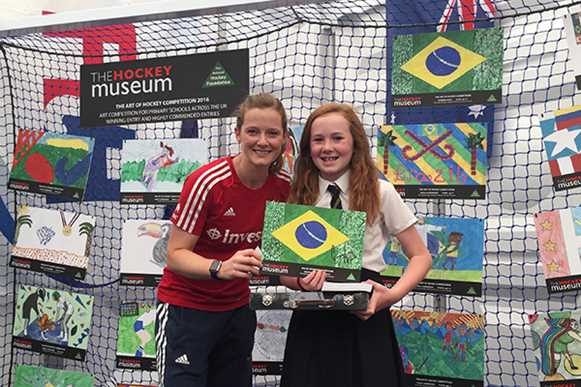 Away from the action on the field, the thousands of fans that have visited the Hockey Champions Trophies over the past two weeks have been able to enjoy a vast array of attractions and exhibitions.

One of the most popular by far has been The Hockey Museum marquee, where a very special collection of rare historical artefacts from the sport are on show.

The central aim of The Hockey Museum is to preserve, share and celebrate the rich heritage and history of the sport of hockey, not only in Great Britain where the modern game started, but also from all round the world.

The Museum is now home to a growing collection of hockey archives, artefacts and memorabilia. A key part of the work of the Museum’s team of volunteers is to register, collate and store these fascinating records and items and over time, to make them accessible to the hockey family and the wider public through the website, newsletters, displays and other exhibitions.

“We are displaying a selection of kit worn by players and officials at previous Olympics, memorabilia from previous Olympics including medals won by Great Britain players at the three London-based Olympics in 1908, 1948 and 2012. We also have archives including the playing records and results from many Olympic events, and the reaction from those who have visited over the past two weeks has been wonderful.”

The exhibition also features all the nations playing in this year’s Hockey Champions Trophies, displaying stamps, images of former star players and flags from all the competing nations.

Another eye-catching aspect is a spectacular 60 metre Hockey Timeline, something that was first displayed along the length of the south wall at last summer’s EuroHockey Nations Championships but has now been updated and now features all the nations that have been competing over the past two weeks.

One of the most popular exhibits this year has been a display of the winning and highly commended entries to the Art of Hockey competition that The Hockey Museum ran in UK primary schools earlier this year.

The entries had to reflect a hockey and South American theme. This display has attracted many, many, schoolchildren into the exhibition who have been voting for their own favourite image.

On Tuesday, Alice Hannan from The Holy Family Catholic Primary School in Surrey was revealed as the winner, with Great Britain star Helen Richardson-Walsh presenting the ten-year-old with her prizes.

For more information about the amazing perseveration and archiving work being done by The Hockey Museum, visit their website: www.hockeymuseum.net.

You too can play a part in helping to give hockey’s history a future by completing The Hockey Museum’s worldwide heritage study by clicking here.