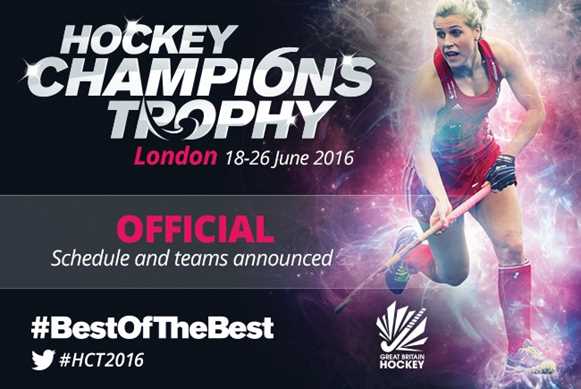 The International Hockey Federation (FIH) is pleased to confirm the match schedule and six women’s teams who will compete in the Hockey Champions Trophy 2016 taking place at Lee Valley Hockey and Tennis Centre in London, England between 18-26 June.

The Netherlands, Argentina, Australia, New Zealand, Great Britain and USA will all go head to head as they battle it out to be crowned the best of the best as Champions Trophy winners.

The opening day of play sees hosts Great Britain get their campaign started with a match against defending champions and recently crowned Hockey World League champions Argentina on Saturday 18 June.

A super Sunday then follows, featuring some mouth-watering games that will see continental rivals go head to head in what is expected to be a highly charged day of hockey action.

Many of the Great Britain team represented England in this very venue last summer as they defeated world number one ranked Netherlands in the final of the EuroHockey Championships. Netherlands will therefore be looking to make amends as Europe’s top two women’s teams meet at 14:00.

That follows the game between Oceania rivals Australia and New Zealand at 12:00, while Argentina and USA will battle it out to see who is the best of the best from the Americas at 16:00.

Other schedule highlights include a rerun of December’s Hockey World League Final between Argentina and New Zealand on Thursday 23 June, while those who were in Queen Elizabeth Olympic Park during the London 2012 Games will be able to witness a rematch of the gold medal game between the world’s top two ranked teams - Netherlands and Argentina, on Saturday 25 June.

Reigning Olympic and World Cup champions Netherlands, who currently top the FIH world rankings, will be looking to get back to winning ways at international events after missing out on the titles at last year’s Argentina Hockey World League Final and the Unibet EuroHockey Championships.

Defending champions Argentina, who recently leapfrogged Australia into second place in the world rankings, will be looking to win two events in succession. They qualified for this year’s Champions Trophy by winning the Argentina Hockey World League in Rosario only a few months ago.

Oceania champions Australia will be looking to go one better at this year’s event, as they finished runners up to Argentina’s ‘Las Leonas’ in the last edition of the Champions Trophy held in Mendoza, Argentina in 2014.

World number four ranked New Zealand will have taken a lot of confidence from their performance at last year’s Argentina Hockey World League Final. There they reached the final of their first FIH international event for a number of years, only to lose to Argentina.

Hosts Great Britain, ranked sixth in the world (based on England’s rankings), will be looking to build upon last year’s success when they won the Hockey World League Semi-Final in Valencia, Spain. They will be looking to draw upon the buzz and passion created by their home fans in this city during the London 2012 Olympics, where they won bronze, and more recently during England’s run to the Unibet EuroHockey Championship title last summer.

USA qualified for this year’s event through the Champions Challenge in Glasgow, Scotland back in April 2014. Following that triumph they went on to finish fourth in the Radobank Hockey World Cup in 2014 before winning the 2015 Pan American Games, defeating Argentina in the final and guaranteeing their place in the Rio 2016 Olympics as continental champions.

This will be the last major international hockey competition before these teams meet again at the Rio 2016 Games. With the matches taking place in Queen Elizabeth Olympic Park, host of the 2012 Games, the Champions Trophy will officially kick off hockey’s Olympic festivities.

With the Olympic, World Cup, World League, European, Pan American and Oceania champions all now confirmed, the stage is set for a truly epic competition. The event is already selling out quickly, with many of the Finals tickets already snapped up.

The men’s Hockey Champions Trophy 2016 will take place in a location yet to be confirmed in Argentina between 11-19 June. More information about that event will be published on FIH.ch shortly.