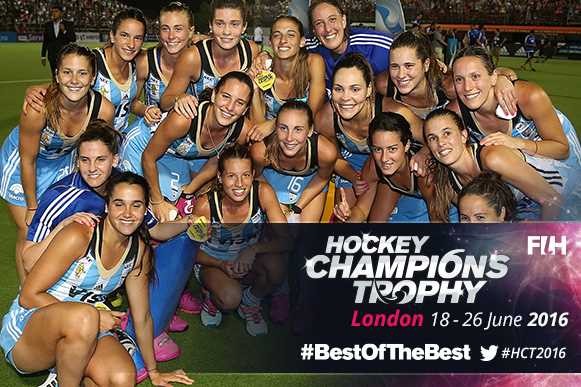 Alongside the Netherlands, defending champions Argentina have been the dominant force in women’s hockey for well over a decade. 'Las Leonas' (The Lionesses) have won five of the last six Hockey Champions Trophy competitions and also claimed the bronze medal at the Rabobank Hockey World Cup in 2014 and silver at the London 2012 Olympic Games.

Despite the retirement of iconic attacking midfielder and eight times FIH Player of the Year Luciana Aymar after the 2014 Hockey Champions Trophy on home soil in Rosario, there is no question that Argentina remain a true powerhouse of world hockey, a fact proven by their title success in the Argentina Hockey World League Final at the end of last year.

Delfina Merino, Carla Rebecchi and drag-flicking defender Noel Barrionuevo are all potential match winners amongst the current group, while 2014 FIH Young Player of the Year Florencia Habif is rated as one of the most exciting emerging talents in the game.

The team is coached by former Argentina men’s international Gabriel Minadeo, who stepped into the role late in 2015 following the resignation of Santiago Capurro and enjoyed near instant success by winning the Hockey World League. It is Minadeo’s second spell as Head Coach of Argentina women, having guided the team to bronze medals at the 2006 Hockey World Cup and 2008 Olympic Games respectively.

Extra info: Although the first women’s teams were officially formed in 1909, it was the appointment of former men’s international Sergio Vigil as Head Coach in 1997 that triggered a rapid rise to greatness. Under Vigil’s leadership, Las Leonas achieved their first Hockey World Cup title, their first Olympic medals and their first Hockey Champions Trophy medals.

The staggering success of the team has seen them achieve a level of fame normally reserved for their national football team, with some of the players hosting television shows and appearing in advertising campaigns for major brands. The achievements of Las Leonas has ensured that hockey is one of the most popular sports in the country, with the player and fan base continuing to grow at great speed.

The team’s reputation for being tenacious even in the face of defeat was the central factor for their now legendary nickname, with the lioness being chosen as their symbol shortly after the team achieved qualification for the Sydney 2000 Olympic Games.

Player perspective – Carla Rebecchi (Forward): “Things are going really well with training and test matches. I would like to win the title again at the Champions Trophy and, of course, to win an Olympic medal, gold if possible. It would be a dream come true.”

One to watch: Carla Rebecchi. A sensational attacker who can change the game in a blink of an eye, Rebecchi is one of the most experienced players in the Argentina line-up and is always influential.