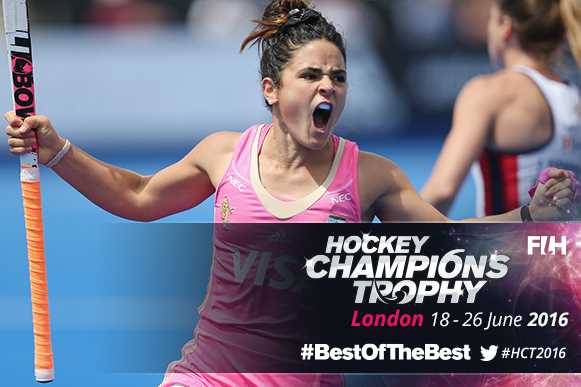 Maria Granatto has been in inspired form for Las Leonas. Photo: FIH/Getty

The race for a top two finish and a subsequent place in the event final at the Women’s Hockey Champions Trophy 2016 is very much up and running, with the three most successful teams in the competition’s history occupying the top three positions ahead of the third day of competition at the Lee Valley Hockey and Tennis Centre.

World and Olympic champions the Netherlands (FIH Hero World Ranking: 1) have made a sparkling start to the competition with superb victories over New Zealand and hosts Great Britain, ensuring that they currently sit top of the standings with six points. Team captain Maartje Paumen continues to be the team’s talisman, having netted five goals here at the London 2012 Olympic legacy facility to sit at the top of the scorer's table and extend her all-time women’s Champions Trophy goals record to 33.

The Netherlands have won six Champions Trophy titles down the years, a record that they share with title holders Argentina (WR: 2) and Australia (WR: 3), who last won the event in 2003. Las Leonas and the Hockeyroos are currently locked together on four points, with Argentina sitting in second place thanks to a marginally superior goal-difference over the third-placed Aussies. That could all change on Tuesday (21 June) when the two sides meet in the first match of day three (1430 - UTC/GMT +1). If one team emerges victorious it would not only keep them in touch with Alyson Annan's high-flying Dutch girls but also provide great confidence ahead of a pool phase meeting with the top ranked team in world hockey later this week.

For Argentina, Carla Rebecchi has been at her brilliant best in London. She scored a sensational penalty corner in Argentina’s 2-2 draw with Great Britain on Saturday before notching a hat-trick of field goals as Las Leonas powered to a 4-1 victory over Pan American champions USA. Rising star Maria Granatto has also been turning heads with her high quality performances and goals, marking herself as an early front-runner for the Best Young Player award. Another player who could be in the running for that award is Hockeyroo Grace Stewart, the 19-year-old forward who has scored in each of the two matches that she has played so far in London.

Following the meeting between Las Leonas and the Hockeyroos, the fans in London will witness the Netherlands in action against United States at 1800. USA will be looking to bounce back from Sunday’s defeat at the hands of Argentina and certainly have enough quality to cause their opponents some serious problems, although few would argue that the Dutch go into the game as heavy favourites. The USA have been creating plenty of goal-scoring opportunities so far in this competition, but will need to turn those chances into goals if they are to upset the form book against the European giants.

The final match of Tuesday will be contested between two sides looking for their first win of the competition, with New Zealand’s Black Sticks (WR: 4) facing home favourites Great Britain (WR: 5). The fans have flocked in their thousands to see Team GB in action so far in this competition, and this match is expected to be no different as the Olympic bronze medallists from London 2012 aim to kick-start their title challenge. The atmosphere is expected to be electric, which will certainly be an advantage for the hosts. However, New Zealand have the experience and quality to not be overawed by the occasion, and in Anita McLaren (formerly Punt) they have a player who can turn a game in an instant.

It promises to be another fascinating day of top class international hockey, so be sure not to miss out!