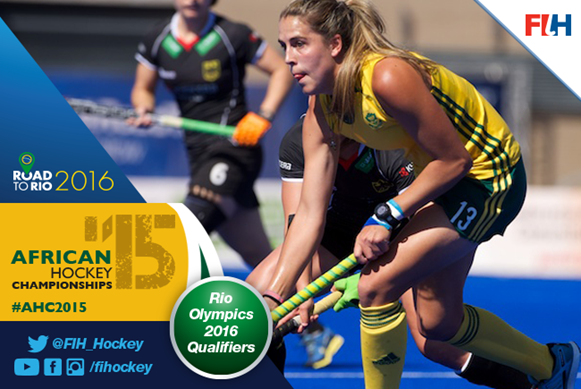 All to play for at African Hockey Championships

Excitement is building ahead of the African Hockey Championships which get under way on 23 October in Johannesburg, South Africa.

While there is always an edge to any continental championship, this year the sense of anticipation is all the more as there is a qualification place for the 2016 Rio Olympics at stake for both the men and the women.

South Africa men’s and women’s teams have won all the previous African Continental Championships since 1993 but, despite this dominance, other teams are now beginning to feel they have a chance at securing top spot.

In the men’s competition there is a record number of entries, with nine teams taking part. This contrasts with 2013, when only four teams competed.

Egypt, ranked 20th in the world, will be hoping to emulate their performance in the FIH Hockey World League Round Two event in Cape Town, South Africa, where they beat South Africa on shoot-out.

In the meantime, Kenya has ambitions to reverse a 2-1 loss to Egypt suffered in Round One of the Hockey World League in their homeland in the city of Nairobi. Kenya last appeared at an Olympic Games in Seoul 1988, but has ambitions to rise up the international standings once more.

While the men’s competition format will comprise two pools and crossover semi-finals and a final, the women’s competition will be a round-robin event, with three points awarded per win and one per draw.

Despite the huge ranking points difference between South Africa women and the remainder of the group, both Kenya and Ghana are harbouring dreams of Olympic glory.

Ghana, the next highest ranked team at 31, have recently undertaken some intensive training under the guidance of coaches working on the FIH Targeted Assistance Programme (TAP). In addition, a fortnight spent training at the facilities of Great Britain and England have helped their preparations for this year's Championship.

For Kenya, ranked 37th in the world, inclusion in the Hockey World League Round One competition in their capital city, Nairobi, has provided some invaluable international experience against sides they would not normally face.

Kenya Coach, Jos Openda, said: “We have trained very well and our main objective is to snatch the bragging rights and qualify for the Olympics. The team played international test matches recently, we were in Uruguay where we played tougher opposition and the girls have gained a lot of experience.”

Among the players to watch in the men’s competition are Hamada Atef, the sharp-shooter from Egypt, who was the north African nation’s top scorer in the Hockey World League series and South Africa’s Lloyd Norris-Jones, who is always on hand when it comes to scoring goals.

In the women’s event, Dirkie Chamberlain will be seeking to resume the form and energy she displayed at the Hockey World League Semi-Finals in Valencia earlier in the year for South Africa, while Ghana’s captain Georgina Sam will be using her experience to guide a young but hugely ambitious Ghana team to success.

The action in the women’s competition starts at 12:15 local time, when Ghana take on Nigeria, while the men get under way with a clash between Namibia and Botswana at 16:45pm.